The genus Drakaea (Orchidaceae) is endemic to south-western Australia and is pollinated by sexual deception of thynnine wasps. Drakaea occupies a specialized habitat of open sandy areas and utilize a unique mycorrhizal fungus. Of the ten species in the genus, five are Declared Rare Flora and another is known only from herbarium records. All species are believed to be highly specific to both pollinator and mycorrhiza.

Baiting for mycorrhiza and pollinators will elucidate the factors controlling distribution and rarity in Drakaea. A combination of population genetics and baiting experiments across the range of Drakaea will provide the mechanisms by which populations diverge ecologically and genetically. Finally, the phylogenies of the Drakaea, wasp and mycorrhiza will be produced to establish how the ecological and genetic processes have shaped co-evolution between the orchid and its hosts. This study represents the first of its type to integrate research of mycorrhiza and pollinators in the study of orchid speciation and conservation and will serve as a benchmark for orchid conservation research.

Phillips RD, Hopper SD, Dixon KW (2010) Pollination ecology and the potential impacts of the environmental change in the Southwest Australian Biodiversity Hotspot. Philosophical Transactions of the Royal Society of London, 365, 517-528. 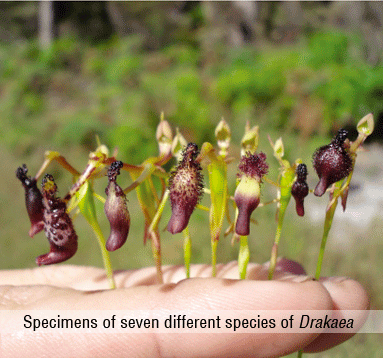 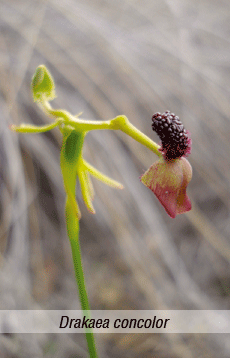 Drakaea concolor is a rare and endangered species known from a handful of locations in sand-plain from Watheroo to Kalbarri.
It is pollinated by an undescribed species of Zaspilothynnus that is widespread in the region.