Institute: The University of Southern Queensland

The nationally endangered “Black-clubbed spider orchid” or Arachnorchis (syn. Caladenia) atroclavia (Fig 1) has a total remaining wild population of less than 120 plants. Although secure in a national park, the species is threatened by grazing, inappropriate fire regimes and potentially, climate change.

We have isolated fungi from stems of the orchid and used DNA sequencing to determine the identity of these mycobionts. In common with other Caladenia spp. the main fungal partner was a member of the Sebacina vermifera complex. The fungus successfully germinates seeds under laboratory condition (Fig 2) suggesting that it is capable of forming mycorrhizas with the orchids.

It is intended to produce a number of seedlings of the orchid under horticultural conditions which can then be reintroduced into the natural state to bolster the dwindling natural populations. 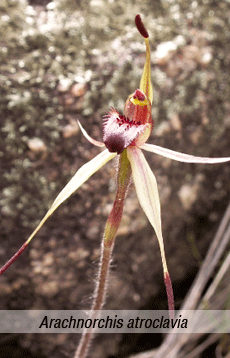 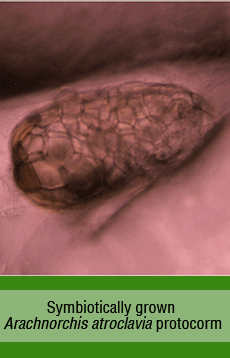