Fire is a common phenomenon in the Australian landscape and affects flora and fauna communities, including orchids and their mycorrhizal fungi. Information on the effect of natural and simulated fires on native habitats will be invaluable for conservation strategies and land management.

This comparative study will determine whether controlled fires are beneficial or detrimental to orchid mycorrhizal fungi across a wide range of stem-collar colonised orchid species. Information on the isolatability and effectiveness of the mycorrhizal fungi will be important for assessing the effects of fire on the survival and regeneration of native orchid populations. Results from this project will provide a platform for further postgraduate studies on the longer term effects of fire in the Australian landscape and pave the way for other environmental related projects. 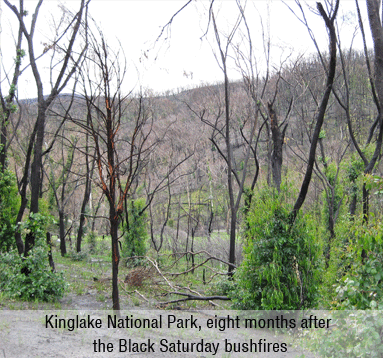 This project investigated the effect of wild bushfires and simulated fires on 5 terrestrial orchids from the Grampians, Kinglake, Lower Glenelg and Wonthaggi on 5 orchid populations in the Caladenia and Paracaleana genera. The mycorrhizal fungi were compared to determine variations in plant host interactions including occupation, morphology, isolatability, response to smoke water (SW) and germination efficacy. The effects of fire were variable and unpredictable for peloton occupation, peloton morphology and fungal isolation. Fungal growth was increased by fire from C. fragrantissima, C. gracilis, C. orientalis and P. minor plant hosts but reversed for C. phaeoclavia. Responses to smoke water (SW) was species-dependent rather than fire-determined, suggesting differences in the fungal ability to metabolise SW. Fungal growth of some isolates were enhanced by low SW (0.01-1.0 mL/L) but most (146/150) failed to grow at higher SW (10.0mL/L) from both unburnt and burnt sites. Fire caused significant differences in germination and leafing induction, with leafing induced by more unburnt isolates and germination induced by more burnt isolates.

This project investigated the use of fuel reduction burns at different seasons on endemic orchids to find the least damaging season for a prescribed burn. In one study, the autumn-flowering orchid, Pterostylis revoluta was less damaged by spring-summer burns compared to autumn-winter burns. These results were mirrored in another study on two spring-flowering orchids, Glossodia major and Thelymitra pauciflora. The least damaging season to burn was also spring-summer compared to autumn-winter burns. Burning during autumn and winter reduced plant numbers and sizes, to the extent of 100% losses in re-emergence the following year. Mycorrhizal associations were also changed with fire and correlated with plant vegetative or reproductive development.