This project began some fifty years ago when in the late 1950’s I first began looking at these rather dull self-pollinating mostly blue flowered sun orchids near my childhood home at Mylor in the Adelaide hills. I had recently received a copy of the Flora South Australian with the Orchidaceae in it.
Even on my parent’s property I was able to recognise species which did not seem to be treated in the Flora. Later some of these were found with names in Nicholls’ Orchids of Australia but others I knew only by their nick-names.
As time went by other botanists called them ‘local variants’ and I came to accept this.
That all changed when I spent some long service leave in the Eastern States during 1988: imagine my surprise when I began to see these same so called ‘local variants’ in other states.
Some of my images of these were published in various journals and in the reference book Orchids of South Australia in the 1990’s and attracted the attention of Melbourne orchidologist Jeff Jeanes who asked me to collect and send to him any South Australian sun orchids which I regarded as ‘new to science’.
Many of these were published in Muelleria as new species by Jeff in 2005.
This work spurred me on and with the help of members of the Native Orchid Society of South Australia (NOSSA), with some funding from the AOF, in spring 2005 we searched the state looking at Jeff’s new species and found to our surprise that there were other, often common species, which did not fit into any of the named taxa including those just published. We repeated the exercise each spring since then and managed to separate out about a dozen new taxa by late 2008. All were collected over their often extensive range, as both pressed specimens, pickled material and digital images. Each year it became easier to find these species with their various tag names like Thelymitra ‘Pale capsules’ and T. ‘ Broad leaf’ as we became familiar with their flowering times and habitat. Some did indeed turn out to be just local variants and could be placed under the old named species but most became ever more easily recognised.
These new species were written up by myself, illustrated by botanical artist Margaret Petridis and together with images by other NOSSA members formed the basis of a paper naming seven of the most common or recognisable new South Australian sun orchids. This paper was passed to Juergen Kellermann, editor of the J. Adelaide Botanic Gdns in March 2009 and duly sent off to be refereed.

In the meantime most of the new sun orchids were added to the chapters on Thelymitra in the latest CD of Orchids of South Australia currently available from The Australian Orchid Foundation and various native orchid societies in Australia and New Zealand.
This has left a number of taxa which still need further work and these will be studied in more detail including DNA testing to be carried out in 2010. The AOF has provided continued funding to allow the studies to continue. 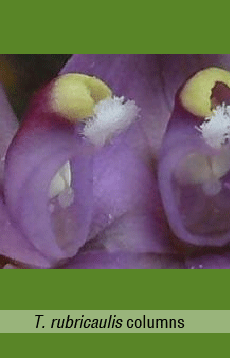