This project will involve close liaison with conservation authorities in Victoria, NSW and South Australia. It will include the Threatened Orchid Recovery Team (Victoria) and Threatened Species Officers (NSW National Parks and Wildlife Service) based at Queanbeyan and Dubbo in NSW. This work will also be assisted by enthusiastic amateur and professional orchidologists.

As many as 300 species of Australian terrestrial orchids are likely to be pollinated by the sexual deception of male insects. The Spider Orchids of the genus Caladenia are the largest group whose flowers mimic the odours and colour of female Thynnid wasps and are pollinated by males attempting to mate with the labellum. Previous work has shown that in most cases, each sexually deceptive orchid species is pollinated by a single specific Thynnid wasp species and that orchid species growing in the same geographical region and habitats do not attract each other’s pollinators.

The aims of this project are to determine:

The information obtained in this project will provide a greater understanding of the pollination biology, evolution and taxonomy of Spider Orchids. It will also assist in conservation planning by allowing consideration of pollinator requirements to be incorporated in recovery plans for threatened orchids. 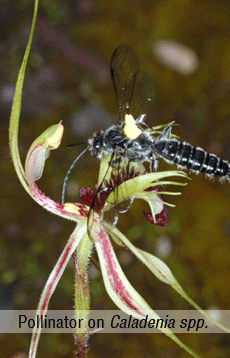