Description: Tasmania has a rich and diverse orchid flora with over 200 orchid species with almost half being endemic to this small island state. Tasmania has 68 orchid species listed as either critical or vulnerable under the Threatened Species Protection Act 1999. Many of these threatened species are narrow range endemics only known from a small number of populations. In comparison to other Australian states with large numbers of threatened terrestrial orchids, conservation targeted research programs have been few in Tasmania with funding for active research limited.

This project will aim to establish an ex situ orchid seed and mycorrhizal fungi collection for the long term conservation and propagation of Tasmania’s threatened orchid flora. This project will also be the first to investigate the specificity and molecular diversity of the mycorrhizal partners of Tasmanian orchids. The project will involve collaboration between Tasmania’s Department of Primary Industries, Parks, Water and Environment the Tasmanian Seed Conservation Centre, Royal Tasmanian Botanic Gardens (RTBG), the Millennium Seed Bank Project, and Kings Park and Botanic Gardens. This collaboration will be a step towards a national seed bank network, promoting skills and information sharing to advance a national approach to orchid seed conservation. In addition the project will expand our understanding of orchid-fungal specificity and diversity, a vital attribute in conserving populations of rare and threatened orchid species. 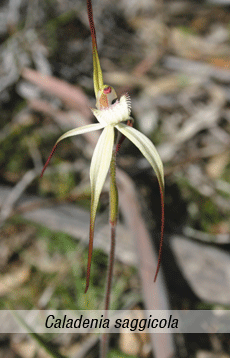 The overarching goal of this project was to establish a Tasmanian orchid and mycorrhiza seed bank for the long-term storage and preservation of threatened Tasmanian orchids. In achieving this outcome the project also provided invaluable information relating to species seed production, germination requirements, mycorrhizal specificity and overall orchid ecology.

In this extension, taxa that were not collected in 2008 were targeted for the 2009 season. Priorities were for taxa with the highest extinction risk, with other taxa collected if available. Additional collections from priority taxa from different sites were also made.
All collection, locations and information relating to habitat, phenology, anthesis, population demographics and recruitment have been submitted to the Natural Values Atlas database (DPIPWE) and the TSCC database.

A full list of species from which seed and mycorrhiza were collected is provided in Table 1. Several taxa of Caladenia, Diuris, Glossodia were hand-pollinated to ensure that seed was set. Seed capsules were collected just prior to seed release, with seed maturation taking up to six weeks. Upon seed maturation, splitting capsules were placed into paper envelopes and stored under natural conditions for three months. Seeds were then emptied from capsules onto clean paper and dried flower parts and chaff were removed from seed. Cleaned seed were then placed in sterile cryo viles with caps loosely fitted. The cryo viles were placed in the seed drying room at the TSCC for two weeks at 15°C and 15%RH. Lids were tightly capped and lids placed under conditions for long term storage at the TSCC
A total of 72 seed collections were made from a total 52 species, almost ¼ of Tasmania’s total orchid flora. 18 seed collections were made from 14 threatened species. Approximately half of Tasmania’s most critically threatened taxa have now been collected, however, half of these remaining taxa have not been observed for many years.

Table 1 Tasmanian orchid seed collections for 2009 (Subset of the data submitted to the TSCC and the NVA). 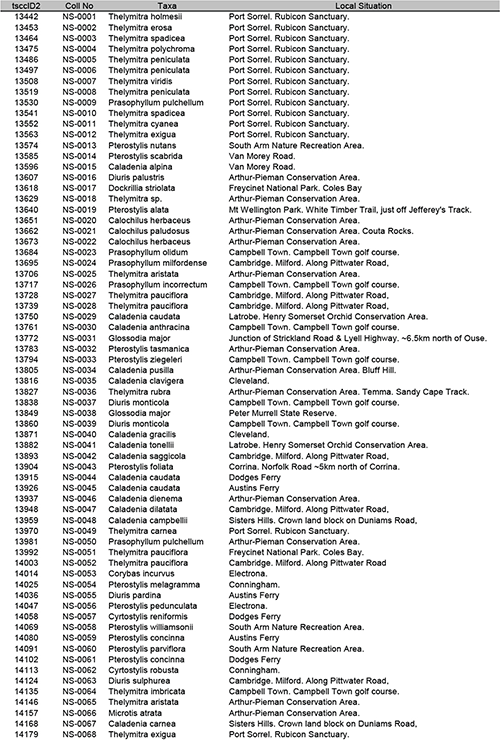 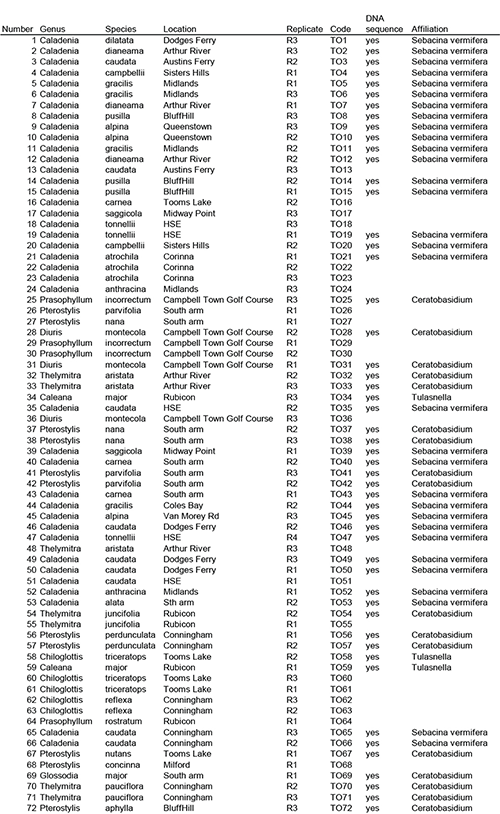 A full list of mycorrhizal cultures made from Tasmania’s orchids is provided in Table 2. Mycorrhizal fungi was isolated from mature plants collected from field sites. Cultures were then subcultured onto PDA for preparation for long-term storage at the Botanic Gardens and Parks Authority (Kings Park, WA) and DNA extraction.
A total of 72 successful mycorrhizal cultures were made from 29 taxa with up to three replicates for each species. Other isolations were attempted, however, due to contamination issues they were unsuccessful. Of these 72 isolates, a total of 32 cultures were from 12 threatened taxa. Each of the 72 isolates are now in long-term storage at the BGPA and a total of 52 DNA sequences have been obtained. The diversity of mycorrhizal fungi isolated from Tasmania’s orchids closely reflect the diversity of fungi previously identified from mainland Australia, however further sampling and analysis is required to confirm the extent of genetic variation between Tasmania and mainland states. Mycorrhizal sequences will be submitted to GENBANK once research papers have been published.

Symbiotic germination trials are in progress. They are being conducted on 90 mm petri dishes containing sterile Oatmeal Agar (OMA) (2.5 g crushed oatmeal, 8 g agar, 1 L sterile de-ionised water, pH 5.5). Dishes are being monitored on a weekly basis for evidence of the following protocorm characteristics: imbibition, development of trichomes, initiation of leaf primordium and first green leaf. Those that reach the green leaf stage will be removed from germination plates and placed into sand-agar containers following the methods of Batty et al (2006). After incubation in these containers surviving seedlings were transferred in soil potting mix and are currently being maintained under glasshouse conditions at the RTBG.

Native orchid seed collection, mycorrhizal isolation and germination had not previously been attempted in Tasmania until the commencement of this project. The number of species targeted throughout the duration this project was substantial, a clear reflection of the proportion of Tasmanian flora and threatened species that orchids constitute. Significant achievements have now been made with seed collected from almost 1/3 of Tasmania’s orchid flora. However, a substantial number of Tasmania’s orchids remain to be collected and mycorrhizal isolations are still required for over 180 taxa. Given the success of this seed collection project and the protocol for mycorrhizal isolation, there is now a challenge to conservation practitioners in Tasmania to continue the collection of orchid seed and isolation of mycorrhizal fungus to further secure the conservation of Tasmania’s orchids. Additional funding and help from volunteers is required to add to this number. As a conservation practitioner myself and being in a position to collect orchid seed and fungi, I will endeavour to continue these collections with an aim to collect Tasmania’s entire orchid flora.
The information gained from DNA sequencing of mycorrhizal isolates facilitates a greater understanding of mycorrhizal diversity both within Tasmania and allows for comparison with mainland Australia. I will incorporate my sequences from the Caladenia taxa sampled into an existing alignment/analysis with other Australian Caladenia isolates to determine the extent of diversity found in Tasmania.

Further funding by The Australian Orchid Foundation has been granted to continue mycorrhizal isolations and identification to fill in the research gaps across Australia’s terrestrial orchid flora.