Over 99% of Australian temperate lowland grasslands have been destroyed since European invasion of the continent. Many grassland plant species are currently threatened with extinction, with the Orchidaceae being over-represented within this group. Grasslands require active management to maintain biodiversity values. Fire is often used for this purpose, however there are few data available to indicate appropriate fire regimes for particular species.

This project will monitor the effects of a transition from livestock grazing to fire as the principal disturbance on the population dynamics of two threatened orchid species, Pterostylis wapstrarum and P. ziegeleri, in Themeda triandra-dominated grassland near Hobart, Tasmania. P. wapstrarum and P. ziegeleri are listed respectively as critically endangered and vulnerable under the Environment Protection and Biodiversity Conservation Act 1999, and as endangered and vulnerable under the Tasmanian Threatened Species Protection Act 1995.

No previous study of the disturbance requirements of these Pterostylis species has been undertaken. It is highly likely that the transition from grazing to burning will result in changes in the vegetation. Given the conservation significance of P. wapstrarum and P. ziegeleri there is a need to carefully monitor the effects of this management change on these species. The study will do this by establishing the current populations of P. wapstrarum and P. ziegeleri and tracking the population dynamics of these species in relation to the live stock grazing-fire transition over the next four years. 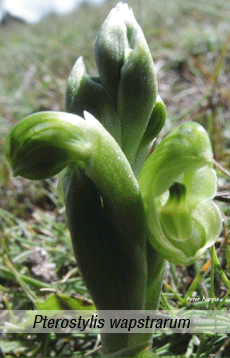 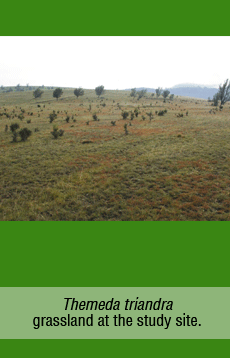