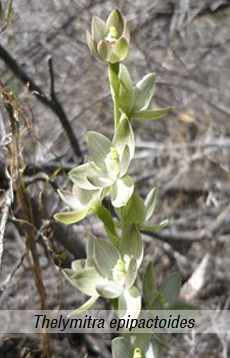 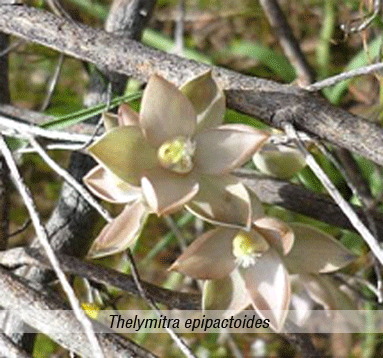 Project Report
Thelymitra epipactoides was successfully germinated over a range of temperatures with multiple fungal isolates with 53 of the 93 fungal isolates testing positive for germination across three of the largest remaining sites of T. epipactoides in south western Victoria. No benefit was found in co-planting with any of the 10 species that were trialled.

The identities of the fungi isolated are within the Tulasnellaceae and are sufficiently different to suggest that they belong to separate species. Clustering of fungi by geographical location by both sequencing and ISSR analysis of microsatellites suggests that the fungi differ not only in ribosomal DNA but also throughout their genomes.

This clustering correlated with the temperature ranges at which germination occurred, with isolates from the Little Desert germinating at the low temperature than those from coastal and lake areas. This information suggests the need for mycorrhizal diversity in introduction programs to increase plant survival and germination under varying climatic conditions. The difference between sites not only in germination thresholds but also genetic diversity also warrants consideration for re-introduction programs and the possibility of introducing mycorrhizal fungi that may not be present in that area.

Due to the success of the germinations initial reintroductions have now taken place; 1500 Thelymitra epipactoides were reintroduced into three sites in Western Victoria following the reintroduction plan (Reiter, 2012), with a further 400 plants supplemented in June 2013 (Reiter, 2013) and 100 in August 2014. The involvement of community groups in the re-introductions was fantastic and the profile of threatened orchids and this species within the local communities has been raised. 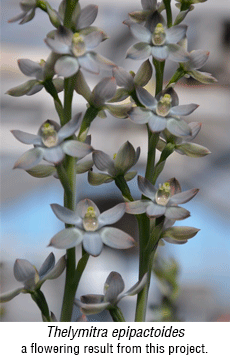 Published papers arising from this research: