Australia is a world biodiversity hotspot for terrestrial orchids, yet Australia has also one of the most threatened terrestrial orchid floras with over 160 species listed on the EPBC act. The unique diversity in the Australian Orchidaceae and subsequent high levels of extinction make studies into their biology and ecology a high priority from both evolutionary and conservation perspectives.

Orchids require colonisation by mycorrhizal fungi for germination and depend on these interactions for nutrition into adulthood. These interactions range from the highly specific 1:1 relationships between orchids and their fungal partners, to those with more generalist associations. Although an increasing amount of work is being completed on Australian orchids and their mycorrhizal counterparts, there are still some large knowledge gaps in our understanding of this intricate relationship.

This three year continental scale collaborative project will investigate mycorrhizal diversity across each southern temperate terrestrial orchid genus and attempt to better understand how this diversity is influenced by habitat type and colonisation patterns within the orchid’s underground organs.

This project involves a collaborative group of researchers including Drs. Ryan Phillips and Belinda Newman (Kings Park Botanic Garden, Perth), Dr. Mark Clements (CSIRO Plant Industries) and Dr. Magali Wright (NRM South Tasmania). This is the first collaboration of its kind in Australia and represents a unique opportunity to forming strong linkages between orchid conservation research centres as well as conduct such a large scale project with limited funding.

These collaborators are in a unique position to undertake such a large scale project due to considerable existing data both in published (i.e. Smith et al 2010, Wright et al 2010a, Swarts et al 2010) and unpublished works which already span a substantial portion of our terrestrial orchid flora. The existing data will be collated, with additional DNA sequencing and germination experiments and new targeted collections to fill research gaps. The proposed research will provide a baseline study to lead into further detailed studies of mycorrhizal associates of individual genera and will identify highest priority research areas for the future. 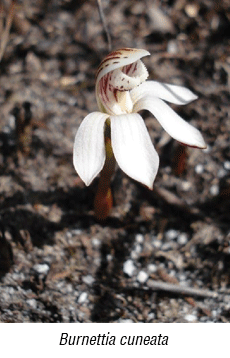 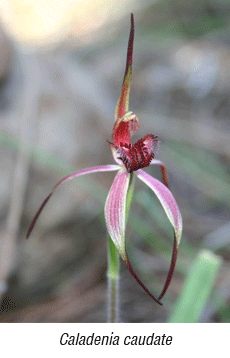 Australia has one of the most threatened terrestrial orchid floras with over 165 species listed on the EPBC act. The unique diversity in the Australian Orchidaceae and subsequent high levels of threat make studies into their biology and ecology a high priority from both evolutionary and conservation perspectives. Orchids rely on mycorrhizal associations to facilitate seed germination and growth. This is an obligate interaction for orchids since their minute dust-like seeds do not contain sufficient stored nutrition for development of the embryo. The orchid-mycorrhizal association is essential to facilitate uptake of soil nutrient and water to the germinating seed and subsequent developing plant. In temperate terrestrial orchids, the association extends to adulthood, where mature plants retain mycorrhizal associations to varying degrees of infection and nutritional dependency.

In this study we investigated the diversity and specialisation of the mycorrhizal association of Australia’s temperate terrestrial orchid flora. We isolated mycorrhizal fungi from mature orchid plants and grew them in culture for DNA sequencing.  ITS sequencing data was used to determine fungal diversity among three key families including Sebacinaceae, Tulasnellaceae, and Ceratobasidiaceae that are known to associate with Australian terrestrial orchids. With an analysis including over 1000 DNA sequences, we found that high specificity for one or very few closely related mycorrhizal species was common among the majority of orchids sampled. Across the three fungal families we found a common trend where often closely related orchids would associate with a particular mycorrhizal species or a narrow group of closely related mycorrhizal species. Geographical distribution varied widely with some mycorrhiza spanning the continent with others occurring in highly localised areas. This research has important implication for sourcing fungi for propagation trials for reintroduction which is now becoming a high priority for many rare and threatened orchid species.

Funding for this project was provided by the Herman Slade Foundation (HSF13-02) and the Australian Orchid Foundation (275-10).

Published papers as a result of this project.