Title: The effects of fire on the reproductive ecology of terrestrial orchids and their pollinators in fragmented landscapes of southern Australia.

This project will combine traditional plant and insect ecology with advanced molecular techniques to ascertain the effects of fire management on terrestrial orchids and their pollinators in fragmented landscapes of South Australia. Although fire can promote the flowering of many species of terrestrial orchids, the effect of fire on the reproductive output and hence long-term population viability of these orchids is unknown. In particular, orchids that depend on specific pollinators may be more susceptible to disturbance regimes.

We will investigate the impact of prescribed burns on the reproductive success of the nationally endangered orchid, Caladenia rigida, and extend the study to species with different pollination strategies. We will assess impacts on pollination, grazing, seed viability and seedling survival. We will link plant demography with studies of the abundance and distribution of their pollinators. Using molecular techniques we will identify insects that act as pollinators of various species and ascertain how they are affected by fire regime. The results will contribute to improved management and conservation of threatened orchids. 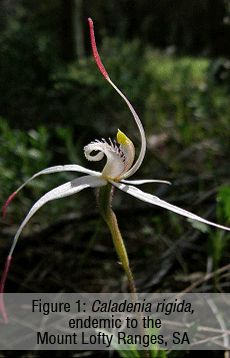 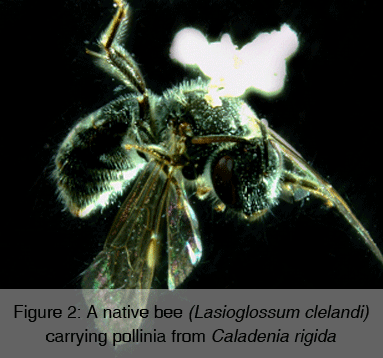 We tagged and monitored Caladenia rigida, Caladenia behrii (both EPBC-listed as Endangered), Caladenia tentaculata and Glossodia major at one autumn burn site, three spring burn sites and adjacent unburnt sites in the Mount Lofty Ranges of South Australia. We collected data before and after the burns to compare changes in emergence and reproductive success at burnt and unburnt sites. We excluded vertebrate herbivores by placing mesh cages around some of the flowers.

It is often reported that fire can promote the flowering of some orchids, including Caladenia species. Surprisingly, we found no evidence that emergence or flowering was stimulated by any of the prescribed burns. Indeed very few Caladenia rigida and Glossodia major emerged following the autumn burn, and we are concerned that a high proportion of plants that have not re-emerged for three consecutive years may have been killed. In contrast, emergence rates at spring burn sites did not differ much to those at unburnt sites. One possible explanation for the effect of burn season is that, although still underground, the apical buds of emerging orchids were scorched by the autumn burn, preventing them from fully emerging and perhaps weakening the tubers. On the other hand, spring burning occurred once the orchids had flowered, set seed and were starting to enter their summer dormancy phase and so their deeply buried tubers were less likely to be harmed by fire.

The mortality of emerging tubers could have long-term implications for the post-fire recovery of orchid populations. While the loss of any tubers is particularly worrying for populations of threatened species, the potential impacts of population decline on currently widespread species should not be ignored. Although orchids produce thousands of tiny dust-like seeds, their reliance on mycorrhizal fungi for germination and recruitment means that they have an extremely low probability of developing into a seedling. The survival of adult plants is therefore crucial to the viability of a population.

Of the few C. rigida flowers that did emerge after the autumn burn, none set fruit. We suspect that there were too few flowers to attract pollinators to the area or that a pollinator visiting one flower was unlikely to encounter a second flower nearby to deposit its load of pollinia. Glossodia major fared better at the same site with larger numbers of flowers emerging and a proportion setting fruit. However, over 90% of flowers or fruit that were not protected by a cage were grazed and no plants were able to release seeds and contribute to the next generation of orchids.

The good news is that impacts on reproductive success appear to be short term with fruit set and seed release two years after the burn being comparable to those before the burn or at the unburnt site. Indeed, our data showed that three years later, grazing levels fell and seed release increased for C. rigida at the autumn burn site, probably because regenerating vegetation provided protection from hungry herbivores. However, this might not provide an advantage for long if orchids become outcompeted by thick understorey and stop producing flowers.

Once again, spring burning had little impact on fruit set, seed release or grazing. These burns were all quite patchy and we think that the mosaic of unburnt vegetation provided refuge and resources for pollinators, as well as protection against herbivory. However, at some sites over 50% of seed pods were destroyed by the fires. Because orchid seeds are generally short-lived and germination rates are very low, a reduction in the number of seeds available for recruitment in the following year could have significant impacts on the long-term viability of some populations, particularly for highly threatened species.

Of particular concern is that even in the absence of fire, grazing levels reached up to 80% at some sites, severely limiting seed production. Burning can push grazing levels even higher. The main culprits were white-winged choughs and grey currawongs, which seem to have acquired a taste for orchid flowers in this part of the country and no doubt found the flowers quite easy to spot against the blackened fire ground. While caging individual flowers may be necessary to reduce grazing pressure in small populations of highly threatened species, it is clearly not a viable option for protecting orchids across their wider distribution. There is therefore a real need to investigate alternative strategies aimed at deterring the birds, particularly over the peak flowering season.

In summary, we recommend that burning in early April be avoided particularly for winter and early spring-flowering species because of the risk of tuber mortality. Spring burns should take into consideration the possible loss of that year’s seed crop. Patchy burns have the potential to leave some food and nesting resources for pollinators, provide areas of protection against herbivory, spare a proportion of that season’s seed crop, and in the case of autumn burns, reduce the proportion of tubers killed by fire. Grazing is a key threat to the population viability of C. rigida and C. behrii, and may be exacerbated by prescribed burning. Flowering or emergence was not stimulated by any of the prescribed burns.

Orchids, insects and fire: The effect of fire on orchid pollinators in eucalypt woodlands of South Australia