This research consists of several collecting trips in Papua New Guinea, the major centre of diversification for the genus Corybas. These trips will result in the collection of new Corybas herbarium specimens, material for DNA analyses, and living plants to be maintained in the collections at Hortus Botanicus Leiden, the Netherlands.

DNA sequences generated from these samples would be combined with additional data from a broad sampling of species to:
– examine relationships within Corybas
– reconstruct the historical timing and geographic patterns of distributional changes and species diversification; and
– examine the frequency and ecological context for changes in flower structure.

The proposed collections, analyses, and specimen studies will also represent substantial progress towards the production of a monograph of the genus. In particular, revision of the New Guinea taxa is much needed – despite the work of van Royen (1983), species are still very difficult to identify in this region. Collection of new material from Papua New Guinea, especially in the botanically poorly known area around Mt. Strong, and further studies of existing collections will almost certainly result in the description of new species. 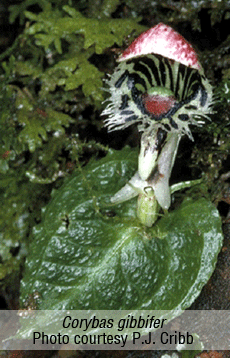 From November 2011 to February 2012, I collected material of eighteen different species of New Guinea Corybas, two species of the related genus Stigmatodactylus, and numerous additional live and preserved specimens for the Orchids of New Guinea project (administered by Dr. Ed de Vogel of Leiden, Netherlands).

Spirit and pressed herbarium material was collected for each of these taxa, together with detailed field photographs and notes to assist with future interpretation of the specimens. These collections represent numerous new locality records—C. betsyae and C. amungwiwensis, for instance, were known only from their type localities. Living material of each species was established for a brief time in both Kainantu, PNG, and Leiden. The living plants, however, did not survive in the long term, due to slug damage and inhibited tuberoid growth, respectively. While this particular outcome was disappointing, my colleagues and I learned some important lessons regarding ex situ conservation of these genera.

These collections also provided essential material for DNA-based phylogenetic and biogeographical analyses of the orchid subtribe Acianthinae. These analyses strongly supported the  monophyly of the genus Corybas sensu latu, and rejected the monophyly of the proposed segregate Asian genera. They also supported the distinctiveness of a New Guinea clade resulting from a single colonization, despite containing a large amount of morphological diversity. Most of the diversity in this clade dates to the period of major uplift of the Central Range in the last 5 million years, and several distinct long-distance dispersal events out of New Guinea have occurred in the interim. Finally, the colonization of the IndoMalay archipelago appears to be the single-most significant event promoting diversification in Corybas.

Lyon, S.P., 2014. Molecular systematics, biogeography, and mycorrhizal associations in the Acianthinae (Orchidaceae), with a focus on the genus Corybas. Dissertation, The University of Wisconsin-Madison, 161 pages.

Orchids, insects and fire: The effect of fire on orchid pollinators in eucalypt woodlands of South Australia