Title: Financial support to present the conference paper titled, “Total Evidence Phylogenetic Analysis of the Orchid Tribe Diurideae and What it Tells Us About the Evolution of Pollination Systems” at the International Botanical Congress held in Melbourne in July, 2011
Applicant: James Indsto
Institute: Royal Botanic Gardens and Domain Trust, Sydney, NSW

In this project phylogenetic methods were used as a research tool to investigate pollination systems in the orchid tribe Diurideae. Previously, two major studies of this orchid tribe have been undertaken using DNA sequence analysis. These studies have led to a revised understanding of relationships within Diurideae since the morphology-based system proposed by Robert Dressler. We have used a total evidence approach in which the data sets of previous DNA sequence-based studies were combined with a data matrix of 100 morphological characters. This analysis has produced the most robust phylogenetic tree for Diurideae obtained to date. Advances in knowledge of pollination biology have been mapped on to this tree to help elucidate the evolution of pollination in this large orchid group. Our findings:

This study has been presented as a conference paper for the Darwin’s Orchids Symposium at the International Botanical Congress held in Melbourne in July, 2011. The Australian Orchid Foundation has generously funded James Indsto to attend this conference to present an oral paper of this work and also the Orchid Workshop held at the Cranbourne Botanic Gardens outside Melbourne on Saturday, 30 July 2011. This project is also being written up as a book chapter in a conference proceedings publication commemorating Darwin’s contribution to our understanding of orchid pollination biology. 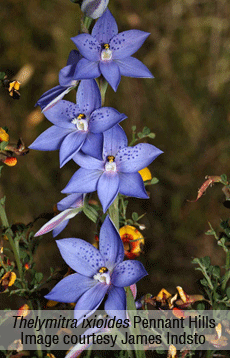 Project Summary:
On 23-30 July 2011, the city of Melbourne, Australia hosted the 18th International Botanical Congress. The congress was divided into a series of symposia and guest lectures. Two symposia honouring the work of Darwin (1862) were held on the 28 July. To honour Darwin’s memory it was decided to publish the proceedings of these symposia in Darwin’s Orchids Then & Now 2014  Edited by Retha Edens-Meier and Peter Bernhardt. University of Chicago Press.