The overall project investigates the roles played by mycorrhizal fungi in carbon and mineral nutrient acquisition of green Western Australian (WA) orchids. Approximately 400 orchid species occur in this region, with an increasing number listed as either as being rare or threatened. The aim of this project, by using some of the more common species (Microtis media, Disa braceata and Pterostylis sanguinea) as representations of the family, is to get a better understanding of the eco-physiological attributes of these plants and in so doing to contribute vital information required for the improved management and conservation of WA’s orchids. This project as a whole will provide a characterisation of the mechanisms that underpin development of selected Australian orchid species from their juvenile (seed germination and protocorm) phases, through to their autotrophic phases. 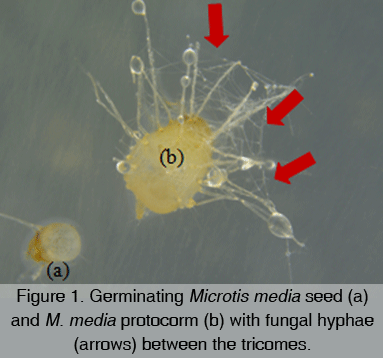 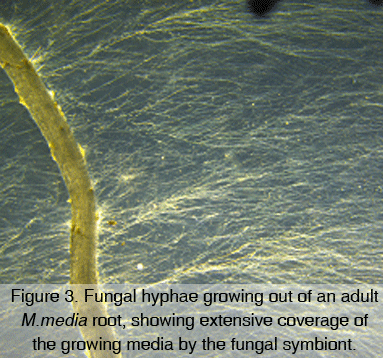 This study focuses on the common mignonette orchid, Microtis media (R.br), which has recently successfully expanded beyond its natural habitats, often into novel and disturbed settings such as garden and horticultural beds. Investigations into the basic eco-physiology of M. media have elucidated multiple adaptations which have contributed to the success of the species. The assimilation of phosphorus and carbon by the mycorrhizal symbiont, followed by the movement of these resources into M. media is evidence of the mutualistic nature of the symbiosis. Importantly, results have demonstrated the inter-generational sharing of carbon in M. media, facilitated by their mycelial networks.