There are several genera and species of terrestrial orchids shared by Australia and New Zealand (NZ). These may represent vagrant distributions of Australian species that dispersed to NZ or they may be distinct species endemic to NZ. Species of the genus Spiranthes (e.g. S. australis and S. novae-zealandiae), Chiloglottis and Microtis are some examples. It is known that terrestrial orchids rely on fungal endosymbionts for seed germination and nutrition; however, whether these new arrivals share the same endomocorrhyzae as their Australian counterpart is not known.

As part of my research project I will investigate phylogenetic affinities of a select number of NZ orchids with their Australian counterparts. The identity of their endomycorrhizae and the extent of specificity will also be analysed by extracting and culturing fungal isolates for DNA extraction and sequencing. An ex situ germination assay with inoculated seeds of two species will be used to determine germination specificity. An in situ seed baiting experiment will be set up at Otari-Wilton’s Bush, Wellington, to identify whether patterns of viable symbiosis sites exist around established plants.

Funding from the Australian Orchid Foundation will be used to visit the Biodiversity Conservation Centre at King’s Park Botanic Gardens in Perth and gain training in well-established orchid mycorrhizal techniques. These techniques have never been used in NZ orchids and it is important for the conservation of NZ terrestrial orchids that these methods are disseminated among NZ orchid scientists.

This project will provide insights to NZ orchid and mycorrhizae specificity and biogeography. Furthermore, it provides an important contribution to the conservation of NZ terrestrial orchids, almost one third of which are listed as at risk or worse. 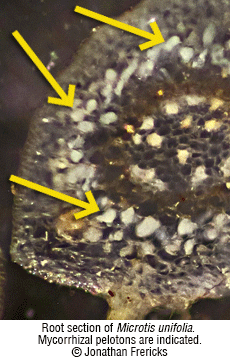 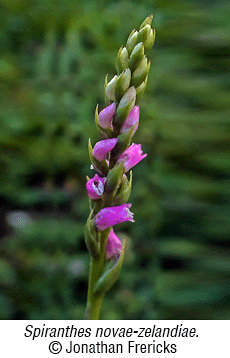 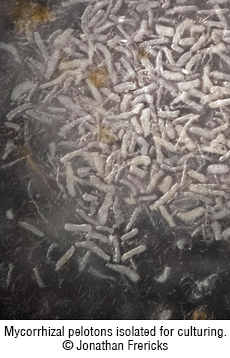 Seed viability was considerably reduced after five months in the soil, suggesting that seeds do not persist in the seed bank beyond one growing season.