Epiphytic orchids (orchids which grow on other plants for support) are a highly diverse group that inhabits the poorly explored realm of the rainforest canopy. Very little research has been conducted in Australia on epiphytic orchids, which represent approximately a quarter of Australia’s orchid species. As epiphytes have no direct contact with the ground, they are highly dependent on continuous rainfall or fog and are therefore extremely sensitive to small changes in precipitation and will be strongly affected by climate change.

I will investigate the diversity patterns of epiphytic orchids within the montane environments of the tropical and subtropical regions within Australia. This research will examine how small scale factors such as micro-climate and larger scale factors such as altitude influence the diversity patterns of epiphytic orchids. By gaining detailed information about these species distributions, climate modelling will be applied to project the changes in distributions under various climate change scenarios. This will allow me to predict which species will be at threat of habitat loss under climate change. 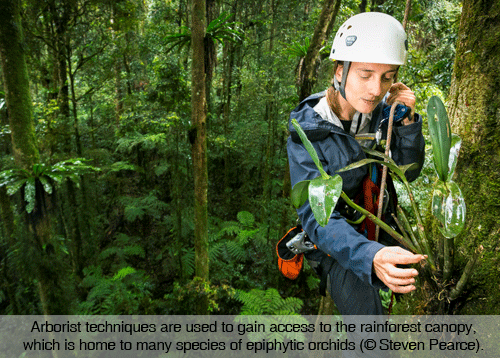 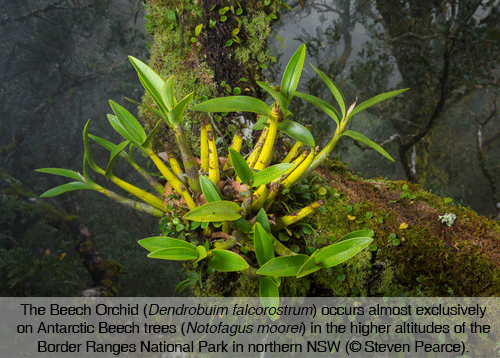 My thesis examined the distribution of orchids, ferns and moss epiphytes over two spatial scales, within the host tree and across elevation, and examined how gradients of light and moisture affected these distributions. The study focused on the two epiphyte ‘hotspots’ in Australia, the tropical rainforests in the Wet Tropics Region (Far North Queensland) and the subtropical ‘Gondwana Rainforests’ (northern New South Wales). Orchids occurred in the most exposed and driest micro-habitats, having the highest total transmitted light levels and vapour pressure deficit (a measure of humidity) compared to ferns and other angiosperms. There was also strong partitioning of species across light and moisture gradients within taxonomic groups, suggesting that microclimatic factors play an important role in the realized niche spaces of epiphytes. Orchids had a high association of drought mitigating characteristics such as crassulacean acid metabolism and thickened or succulent leaves, traits which are well suited to low humidity, high light environments. The strong patterns found in the species richness and composition of epiphytes over host tree and elevation gradients suggest that moisture, temperature and light may be one of the major influences on epiphyte distributions in these rainforest ecosystems.​