Orchid mycorrhizal fungi are known to play a critical role in the establishment and recruitment of orchid populations. Until now, our ability to learn about these interactions has been limited to studying fungi in the plant or in culture. This creates a barrier to knowledge, whereby mycorrhizal fungi that are unculturable, or not associated with a plant are invisible to researchers.

In this project, we will employ novel DNA sequencing techniques to investigate the evolutionary, ecological and conservation implications of mycorrhizal specialisation in Australia’s iconic spider orchids (Caladenia). By obtaining fungal DNA sequence data direct from soil samples from known orchid hotspots in Australia’s south west, we will uncover the fine scale spatial distribution of fungi associated with orchids. We will also discover if orchid species in a biodiversity hotspot coexist by sharing fungal partners, or are supported by a corresponding high diversity of fungi. The findings will have implications for the management of orchid populations, reintroductions of rare and threatened flora, and our understanding of plant-fungi symbioses and the structure of biodiversity. 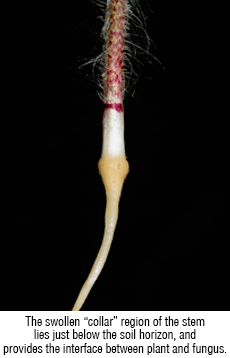 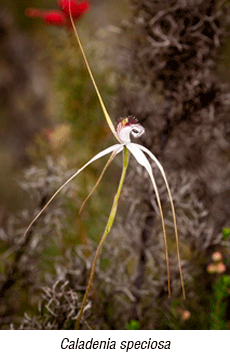 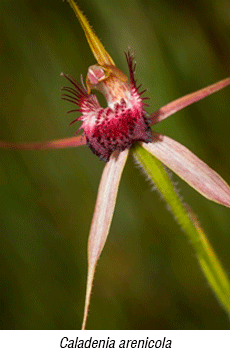 With the support of the AOF we were able to sequence soil DNA from 121 soil cores in an area of 10 x 10 metres. Our method was designed to selectively target Serendipita fungi and their relatives—the fungal taxa confirmed to associate most frequently with Caladenia orchids. Our remarkable study site in south-west Australia held 12 species of orchids, with further orchid diversity present nearby but outside the study site.

In total, our method recorded 130 fungal taxa on the site. Of these, 58 fungal taxa matched to the order Sebacinales, which includes Serendipita. Despite the dense sampling of soil cores, the high orchid diversity, and the demonstrated success in detecting Sebacinales, we were unable to detect any soil fungi that were known to associate with Caladenia either on that site, or more widely. Interestingly, many of the Sebacinales taxa detected were more closely related to environmental sequences in the northern hemisphere than known orchid fungi in Australia.

These surprising results support two major conclusions. Firstly, our study provides more evidence that environmental distributions of orchid mycorrhizas are extremely patchy. If this turns out to be a general pattern in the distribution of Australia’s orchid-mycorrhiza, it raises truly puzzling new questions about the role orchids might play in structuring the distribution of their mycobionts. Secondly, the inability to recover a single OTU with a taxonomic match to our extensive database of fungal accessions isolated from Australian orchids, along with the wide diversity of Sebacinales detected, tells us that there is a wealth of potential mycorrhizal diversity that exists in the soil that is not being used by our orchids. The presence of this rich diversity of Serendipita and Sebacina, coupled with their absence from nearby orchids, raises fundamental questions about the ecological role of these taxa.