This project builds upon our research into the effects of prescribed burning on the reproductive ecology of several species of terrestrial orchids in the Mount Lofty Ranges (see AOF Project 277/2010). We have collected before and after burn data from 2012 – 2014 for two locally endemic and threatened species (Caladenia rigida and Caladenia behrii) and two widespread species (Glossodia major and Caladenia tentaculata).

Results to date show that compared to adjacent unburnt sites, burning in Autumn can reduce the emergence, flowering and seed release of C. rigida and G. major, and lead to an increase in the numbers of orchids that are grazed. In contrast, the impacts of Spring burns on G. major and other Caladenia species were less severe. As part of the current project, monitoring orchids during Spring 2015 will allow us to assess the longer-term recovery of these populations.

It is very rare to be able to assess the impacts of bushfire at sites that have detailed pre-fire history. The recent Sampson Flat bushfires burnt an area of around 12,500 ha including several of our study sites. This provides a unique opportunity to compare the impacts of high intensity summer bushfire with those of cool season prescribed burns. As wildfires usually occur when most orchids are in their dormant underground phase their impact on orchid emergence may be minimal and in many cases they may even promote flowering. However, the much larger scale of a bushfire is expected to affect pollinating insects and grazing animals differently compared to prescribed burning. For example, sexually deceptive orchids relying on a single species of thynnine wasp (C. behrii and C. tentaculata) could be more susceptible to changes in the abundance of these insects than orchids that utilise a wide range of pollinators (C. rigida and G. major). It is also unknown whether grazing rates of orchid flowers and seed pods will increase or decrease following bushfire as a result of changes in the behaviour or number of herbivores or as orchid flowers become more conspicuous. 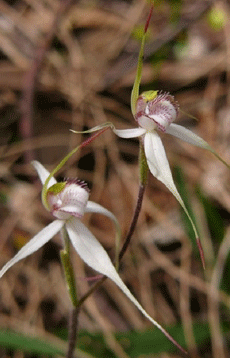 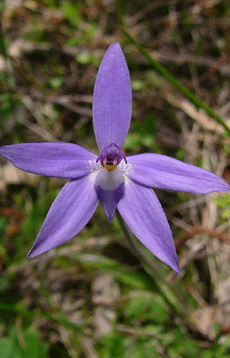 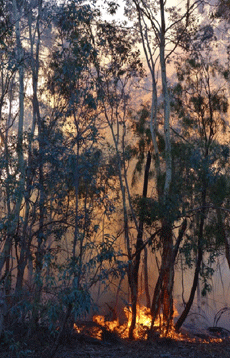 The emergence and reproductive success of Caladenia rigida (left) and Glossodia major (middle) was reduced following an Autumn prescribed burn, but how quickly will they recover and how will they be affected by a large-scale bushfire?

We monitored tagged plants of Caladenia rigida, Caladenia tentaculata and Glossodia major at 13 sites in 2015 and compared emergence and reproductive success with pre-fire data collected from 2005 to 2007, or from 2012 to 2014. We excluded vertebrate herbivores by placing mesh cages around some of the flowers.  Results from the prescribed burning component of this project are summarised under Project 277/2010.

None of the study species were stimulated to flower in greater numbers in the season following the Sampson Flat bushfires. Emergence and flowering was lower at some bushfire affected sites, but the reduction was much less severe than following an autumn prescribed burn. Further monitoring is needed to determine whether the orchid tubers were killed by the fires or simply remained dormant. Although other studies have shown that flowering of some Caladenia species is promoted by fire, this response varies among sites and species of orchids and may be influenced by the amount of competing understorey vegetation present prior to the fires.

Interestingly, fruit set for the two generalist species, C. rigida and G. major, increased at bushfire affected sites and we think this is because there were few other flowering plants present to compete for pollinators. Unfortunately grazing pressure was extremely high at most of the burnt sites and almost all uncaged flowers or fruit were eaten before they had a chance to release their seeds and contribute to the next generation. This meant that the apparent benefits of bushfire with respect to higher pollination rates, were completely outweighed by the higher rates of grazing, and the orchid populations were no better off. It remains to be seen whether grazing intensity decreases as vegetation regrows and helps to conceal orchid flowers.

In contrast, fruit set for the sexually deceptive species, C. tentaculata, was not higher at a site burnt by the bushfires compared to unburnt sites. Indeed, our other studies have found that fruit set for C. tentaculata is particularly low in this region of the Mount Lofty Ranges compared to populations elsewhere, raising concerns as to the health of local populations of its thynnine wasp pollinator.  Uncaged flowers were also subject to relatively high rates of grazing, but data from caged flowers show that seed release is primarily limited by low rates of pollination and that this is not alleviated by fire, at least not in the short term.

As discussed for Project 277/2010, floral grazing is a significant threat to populations of threatened orchids with two species of birds, white-winged choughs and grey currawongs, being responsible for most of the floral grazing. For the management of small populations of highly threatened species, caging of individual flowers would be vital for capitalising on the benefits of increased fruit set following bushfire. Caging is not a viable option for the protection of orchids across their wider distribution and tactics aimed at deterring birds during the peak orchid flowering period need to be investigated.

In summary, bushfire and prescribed burning did not stimulate a greater emergence or flowering of any of the study species. Fruit set for C. rigida and G. major was higher at bushfire affected sites but not for C. tentaculata. In contrast, no increase in fruit set was recorded following prescribed burning. Grazing levels increased to around 100% at some burnt sites and negated any benefits of increased pollination, leading to very low numbers of flowers successfully reproducing and releasing seeds. 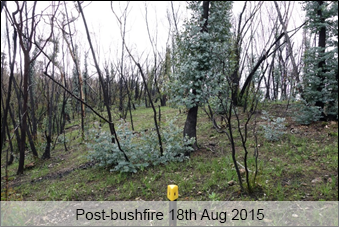 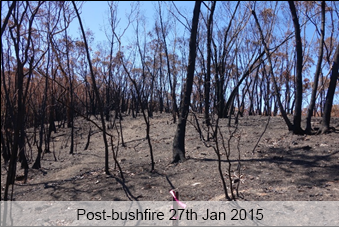 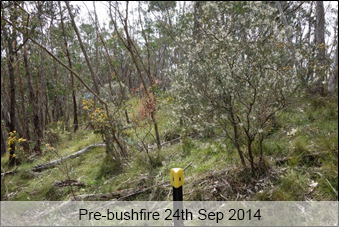 One of our study sites at Millbrook Reservoir, burnt in the Sampson Flat bushfires