Midge orchids (Corunastylis species)  are usually pollinated by tiny chloropoid flies. Several  Corunastylis species are strongly scented but it is assumed that other, apparently scentless, species also attract chloropids by releasing odours that are undetected by the human nose. This idea has not been tested and we have no idea of the identity of any volatile chemicals released by Corunastylis flowers. We know that some Corunastylis flowers exude liquid from the central groove of the labellum callus and that chloropoids appear to feed on these exudates but we know nothing about the chemical constituents of this “nectar.”  We still don’t understand why some flowers produce it and others of the same species apparently do not. Furthermore, while some Corunastylis species are known to be cross-pollinated we do not know their breeding systems and whether they set fruit if self-pollinated by hand. Some species have been reported to self-pollinate in the absence of insects while others make seeds without sex (agamospermy). In fact, the breeding (self-incompatibility) systems of the majority of midge orchid species has not been tested under either field or greenhouse experiments.

Therefore, this project aims to fill many of these gaps through the direct observation of pollination in action, capture and identification of pollinators, standard hand-pollination (breeding) experiments, collection and identification of floral volatile chemicals and nectar constituents in several Corunastylis species native to the Sydney region. We can fill in the missing pieces of the breeding systems of these tiny flowers by using fluorescence microscope to record the development of cross vs. self- pollen tubes inside pistils but we must wear Opti-visors to make these crosses properly.

However, there is a matter of even greater importance, Colin Bower, an orchid pollination biologist, has noted that some chloropoid flies are known to be kleptoparasites. That is, these tiny flies lurk around much bigger predators (like spiders) when they are feeding. These flies actually “steal” some of the leaking bodily fluids of the predators’ victims. Bower has proposed that Corunastylis orchids exude odours that mimic those of insect bodily fluids and that the “nectar” that they secrete may resemble the “blood and gore” shed by dying insects pierced by the larger predators.  If this is the case that means that chloropoid flies are rewarded with a nutritious but “entirely Vegan” meal in exchange for their pollination services on midge orchids. This hypothesis will be tested as part of our project with biochemical analyses. 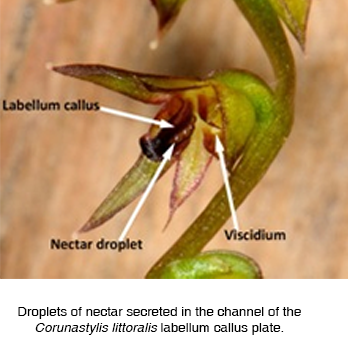 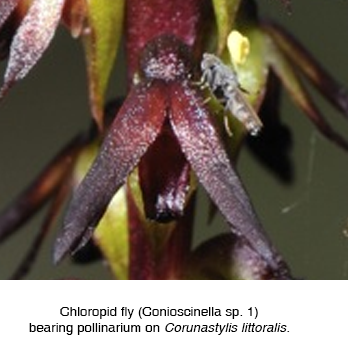 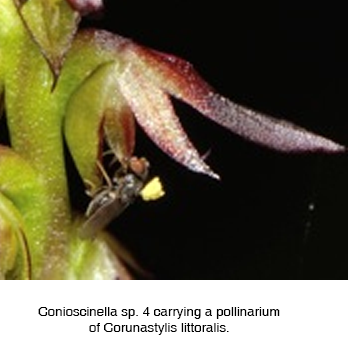 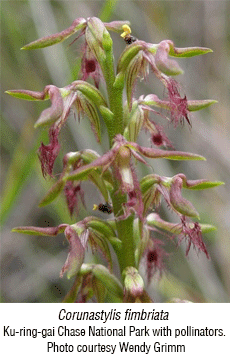 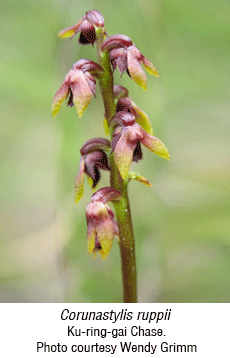 In 2016, we observed and recorded floral presentation and the reproductive ecology of seven Corunastylis species in New South Wales and Victoria. Auricle lobes of the column wings of C. filiformis, C. fimbriata and C. ruppii in NSW were congested with raphides and secreted a fluid for pollinators instead of at the bases of their labella. Scent analyses identified six aromatic compounds in their flowers. Corunastylis rufa and these three species were pollinated by female Conioscinella species (Chloropidae) with 96% representing the same morphotype independent of site or flowering period. A chloropid could carry a maximum of two, whole pollinaria on the dorsum of its thorax. Rates of pollinarium removal in flowers of three species were higher than rates of pollen deposition on their receptive stigmas in NSW. Bagging experiments showed low rates of self-pollination and no fruit set in three species. Inflorescences of four species exposed to chloropids showed variable rates of conversion of flowers into fruit. Corunastylis ciliata (Vic.) showed the highest rate (91%) while C. ruppii had the lowest (35%). Seed set also varied in three species with the lowest rate of developed embryos in C. ruppii (42%) and the highest in C. filiformis (70%). 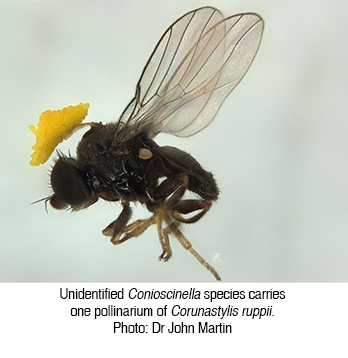 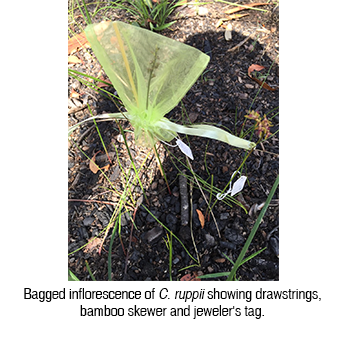 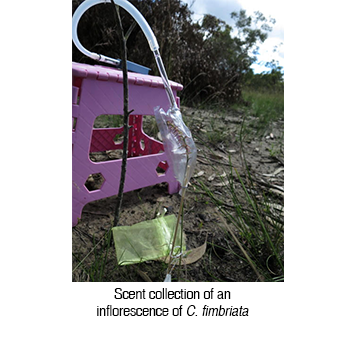 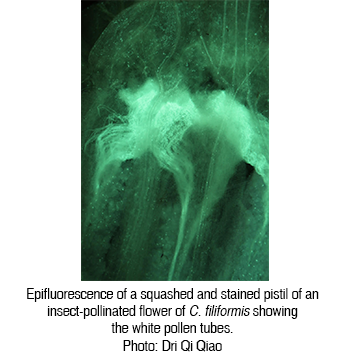