Diuris fragrantissima, commonly known as Sunshine Diuris, is an orchid species native to Victoria listed as endangered nationally. The sole remaining natural population of this threatened orchid occurs near Sunshine, where approximately 30 plants remain. This rare orchid grows in association with a narrow taxonomic range of mycorrhizal fungi belonging to the genus Tulasnella. The presence of a suitable mycorrhizal partner is assumed to be a crucial requirement to ensure the long-term persistence and survival of mature cultivated plants when reintroduced to their natural habitat. Therefore, being able to monitor the mycorrhizal fungi occurrence in situ is fundamental to assessing an appropriate area for reintroduction.

Metabarcoding, a novel cost-effective method of surveying fungi based on the identification of genetic material directly from environmental samples, is suggested to be a more consistent method to determine the occurrence of mycorrhizal fungi in soil compared to traditional slide baiting techniques.  In the present study, we propose to develop a reliable and efficient method to detect Tulasnella spp. in soil using the metabarcoding approach. This method will be used to map the distribution of Tulasnella spp. at the only remaining Diuris fragrantissima native site. This information can then be used by those managing the recovery of this critically endangered species, to identify and target microsites containing Tulasnella spp. for recruitment and/or reintroduction activities, maximising the chances of success. The principles and methods developed in this study are likely to be applied to the recovery programs for other threatened orchid species. 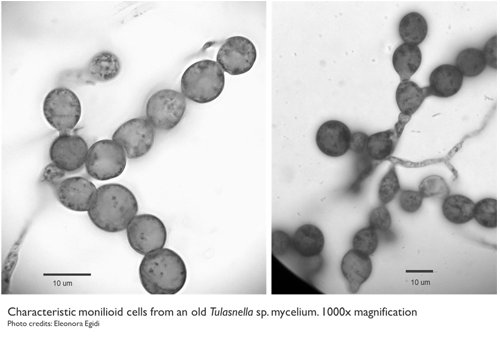 A total of 94 soil samples were collected on two dates (21st and 28th of July, 2016) from a native orchid site in Sunshine. The sample pool included orchid rhizosphere and bulk soil samples from the area where the native D. fragrantissima plants occur, as well as additional zones outside that. The soil samples were sequenced using the meta-barcoding approach and the quality-filtered data set comprised a total of 2,707 OTUs. Fungal communities from bulk and orchid-associated soil exhibited similar patterns of abundance at the phylum level. However, Tulasnella Operational Taxonomic Units were recovered from the rhizosphere exclusively, suggesting a limited occurrence of the fungus in the Diuris native site. In addition to Tulasnella spp., a high diversity of fungi was retrieved from Diuris fragrantissima rhizosphere soil, which will require further investigation. Overall, NGS technology has proven to be a powerful method for large-scale screening of fungal isolates in orchid-associated soil and revealing distribution patterns of Diuris-associated mycorrhizae.

The results of this work have been presented at two national conferences (11th Australasian Plant Conservation Conference 2016, Melbourne, and Australian Microbial Ecology Conference 2017, Melbourne) and are currently under submission for publication. The biological, taxonomical and ecological characteristics of Diuris-associated Tulasnella spp. will be further investigated by Ms Karina Aedo in an Honours project at La Trobe University (to commence in March 2017).

Published papers arising from this research:

Egidi E, May T, Franks A (2018) Seeking the needle in the haystack: Undetectability of mycorrhizal fungi outside of the plant rhizosphere associated with an endangered Australian orchid. Fungal Ecology 33(2018) 13-23 www.elsevier.com/locate/funeco