This project will investigate the development of the velamen, the multicellular layer of dead cells that covers the surface of orchid roots. Compared to terrestrial orchids where the velamen is thin, the velamen of epiphytic and lithophytic orchids that have aerial roots is typically much thicker, consistent with the velamen’s established role in water capture and retention. Velamen cells develop thickened, secondary cell walls before they undergo programmed cell death. These wall thickenings vary between different groups of orchids and have been studied as a taxonomic characteristic, and often form delicate networks of carefully-organised cellulose ridges.

i) Characterise velamen development in selected epiphytic and lithophytic orchids, and,

ii) Determine the role played by microtubules in velamen formation. 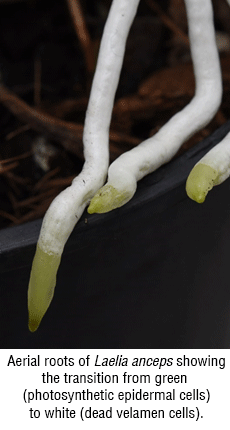 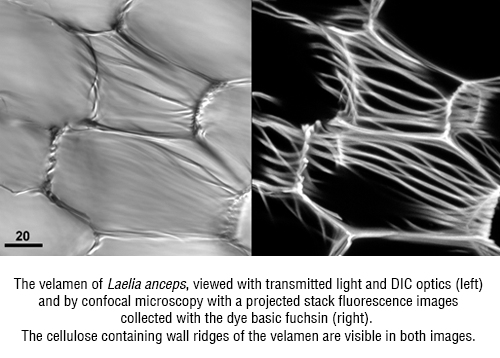 In the video below we have taken the fluorescence images of the Laelia anceps velamin and reconstructed them in three dimensions.

The carbohydrate cellulose, a polymer of the sugar glucose, is the most common polymer in the natural world as it is the primary component of the cell wall of all plants. Understanding the mechanisms through which plants structure their cell wall is of more than academic interest: the physical properties of the plant-derived materials such as the cotton that we wear, the paper that we write on, and the timber that we use for construction all depend on the organisation of the cellulose within the material. Despite several decades of research, scientists do not yet fully comprehend the processes through which cellulose within the cell wall is organised.

In this project, the organisation of the secondary cell wall within the orchid velamen was investigated to determine whether it would be a suitable system in which to investigate the general properties of secondary cell wall formation. The orchid velamen is a multicellular epidermal layer found around orchid roots, and consists of dead cells that have patterned cell walls composed of aligned bundles of cellulose. These cell walls are, therefore, superficially similar to the specialised cell walls that form the majority of commercially important fibres. They do, however, have one specific difference and that it that they form at the surface of the plant, rather than in the plant’s interior, and are thus more readily available for experimentation.

Because of the suitability of orchids for tissue culture and genetic manipulation, and because the velamen cell walls are directly exposed to the surface of the root making them available for experimentation, this study concludes that the orchid velamen is a suitable model system for studying the organisation of the plant secondary cell wall. In particular, roots of the commonly-grown orchids Laelia anceps and Dendrobium sp. appear ideally suited to developing this research.

Lignified cell walls were stained with the dye basic fuchsin, and imaged in a cross section through the root of the orchid Dendrochilum gluamceum by confocal microscopy. The resulting optical series which covers a depth of about 30 μm was then converted into a 3D representation. In this species, the velamen layer is four cells thick, and these dead cells show lignified, secondary cell walls in a spiral pattern. Inside the velamen layer, the exodermis has a lignified outer wall which also shows tilsosomes. Understanding the formation of secondary cell walls in the orchid velamen may help researchers understand secondary cell wall formation in other systems, including the developing xylem. The scale bar equals 50 μm.