Within subtribe Prasophyllinae Schltr., Corunastylis Fitzg. (c. 60 species: 56 named and 4 with informal names) has been little studied and its taxonomy and intrageneric relationships are unresolved. Corunastylis is mostly endemic to Australia, with two species occurring in New Zealand and one in New Caledonia. The species of Corunastylis were transferred to Prasophyllum R. Br. (Mueller, 1889), and later to Genoplesium R. Br. (Jones and Clements, 1989). Subsequently Jones et al. (2002) have proposed moving all but the type species of Genoplesium back to Corunastylis, however, this recent taxonomic change has not been widely accepted. A recent phylogenetic analysis of Prasophyllinae using ITS (Clements and Miller, unpublished) suggested that Corunastylis (11 sampled species) is paraphyletic, because species of the genera Mecopodum and Chiloterus are nested within it. Funding from Australian Orchid Foundation supports 1) field work in SE Queensland, NE Queensland, Victoria, and South Australia 2) molecular work by adding an additional plastid locus (matK) as a complementary marker to produce well-resolved and robust phylogenies. The proposed project here will expand taxon sampling and data gathering for Corunastylis and increase our understanding of the phylogeny of Corunastylis and enable us to improve the taxonomy of this group. 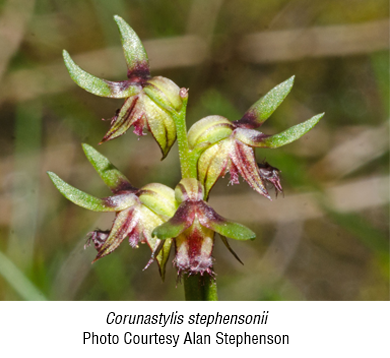 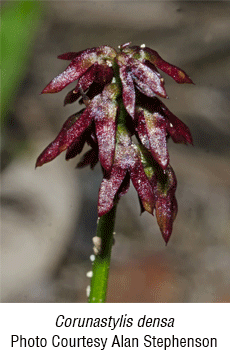