Cryptostylis is one of Australia’s most remarkable orchid genera, renowned for its unique interaction with its Ichneumonid wasp pollinator, Lissopimpla excelsa. This wasp pollinates all five Australian Cryptostylis, which co-flower and occur in sympatry, yet curiously no hybrids are observed. This project investigates mechanisms that could explain the absence of hybridisation between Australian Cryptostylis species, such as ploidy level and fungal symbiont usage. Additionally, next generation sequencing will be used to create the first phylogeny for the genus, encompassing all the Australian species, as well as species from Asia. Almost no research has been done on Asiatic Cryptostylis species since their description in the early 1900s, and of the 23 accepted species, only seven appear to have been subsequently mentioned in field guides or literature. This project will aim to shed light on some of the basic ecology of these Asiatic species, and their relationship with our own Australian Cryptostylis. 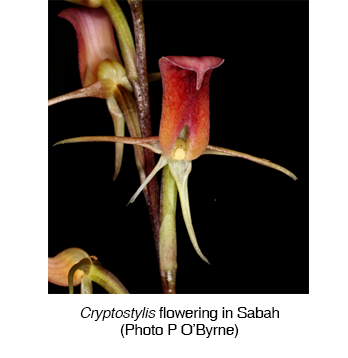 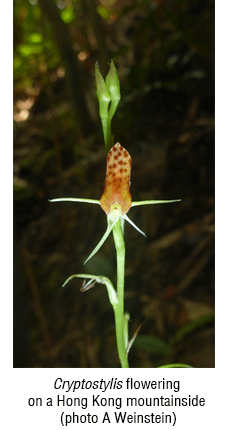 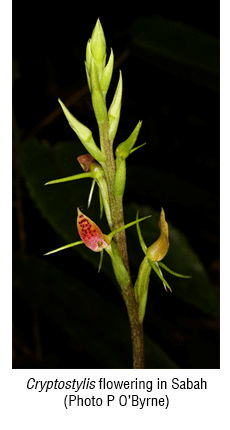 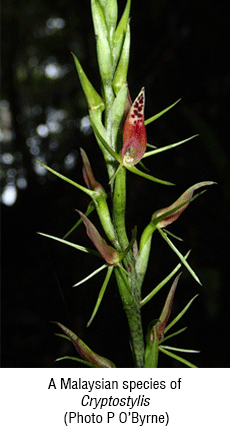 The project focussed on the orchid genus Cryptostylis, a system with a unique case of pollinator sharing – five Australian species, four of which are largely sympatric, all deceive the same male ichneumonid wasp pollinator Lissopimpla excelsa.

Reproductive barriers contributing to the absence of hybrids between Cryptostylis species were investigated. Pre-pollination barriers, assessed in field experiments, did not prevent hybridisation. Hand cross-pollinations conducted among the four common Cryptostylis species in a greenhouse all produced pods, however seed mass and the percentage of formed embryos were reduced in hybrids. Differences in ploidy and chromosome number likely explain this post-pollination fitness reduction. The unique reproductive biology of Australian Cryptostylis, encompassing pollinator sharing, self-incompatibility, and post-pollination reproductive isolation driven by large ploidy differences, may indicate that its mode of diversification may differ greatly to those in other sexually deceptive genera.

To determine the semiochemicals involved in the attraction of Lissopimpla excelsa to Cryptostylis ovata, bioassay-guided fractionations of Cryptostylis solvent extracts in combination with ﬁeld bioassays were conducted. (S)-2-(Tetrahydrofur-an-2-yl)acetic acid [(S)-1] and the ester derivatives methyl (S)-2-(tetrahydrofuran-2-yl)acetate [(S)-2] and ethyl (S)-2-(tetrahydrofur-an-2-yl)acetate [(S)-3], all previously unknown semiochemicals, were conﬁrmed to attract L. excelsa males in ﬁeld bioassays.

The mycorrhizal associations of all five Australian and three Asiatic Cryptostylis species were investigated. Fungal isolations and direct sequencing of the ITS locus from peloton-rich root tissue showed that all sampled Cryptostylis species associate with a closely related group of Tulasnella lineages. Some of these lineages are known to associate with other Australian orchid genera in the Drakaeinae subtribe (Diurideae). All Australian Cryptostylis associated with 3-5 Tulasnella operational taxonomic units (OTUs), except for the partially mycoheterotroph C. hunteriana where only one Tulasnella OTU was detected. In total, nine OTUs were detected in Australian Cryptotylis and five were shared among those species.