Sexual deception is widespread in Australian terrestrial orchids. These rewardless orchids trick male insects into visiting by mimicking the female-produced sex pheromone. Research into sexual deception in Australia has largely focussed on thynnine-wasp pollinated orchids in the sub-tribe Diurideae, which make up the bulk of the orchid diversity in Australia. One candidate sexually deceptive genus outside this group is Pterostylis (sub-tribe Cranichidae). Pterostylis is unusual in that it is thought to attract various types of fungus gnats and other flies. One recent study confirmed sexual deception of males of a single species Mycetophilid fungus gnat by Pterostylis sanguinea orchids (Phillips et al. 2014). However, it is unclear how prevalent sexual deception is within Pterostylis, and whether there are also other pollination strategies involved.

Anecdotal observations dating back to the late 19th and early 20th centuries suggest that Pterostylis orchids are pollinated by various types of flies. My study will be the first to comprehensively investigate pollination across the breadth of the genus. I will focus on determining the pollinators and pollination strategies in each of the ~12 major sub-genera within Pterostylis. In a representative subset, I will further investigate the importance of pollinators for reproduction in Pterostylis. Finally, I will investigate the specific chemicals used to sexually deceive fungus gnats in a couple of representative species. 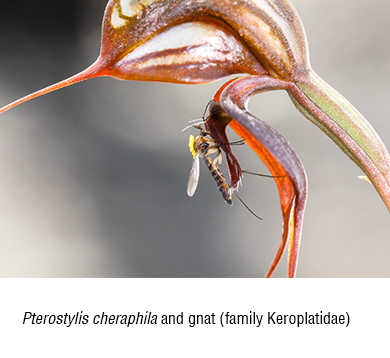 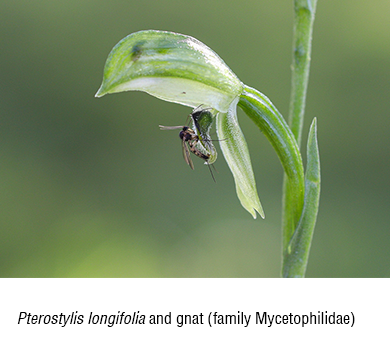 The aim of this project was to investigate the pollination and chemical ecology of Pterostylis orchids.

Second, I investigated the pollination mechanism in P. cycnocephala in further detail. This species is the first confirmed example of pollination by sexual deception of male Sciaridae fungus gnats in Australia. The male gnats attempted to copulate with the prominent black labellum appendage and were able to locate flowers hidden from view, suggesting long-range attraction is primarily due to floral odour.  However, male gnats displayed reduced copulatory behaviour when the labellum was absent and when the labellum appendage was inaccessible, suggesting that appropriate morphology may be required to elicit the copulatory behaviour needed for pollination.

Third, I investigated the chemistry underlying sexual deception of male fungus gnats by P. orbiculata orchids. I found a mixture of five hydrocarbons shared between P. orbiculata orchids and female Mycomya sp. (Mycetophilidae) fungus gnats, which included three alkanes, a C23 diene, and a C23 triene. The triene was an undescribed natural product, which we synthesized and confirmed to be (6Z,9Z)-1,6,9-tricosatriene. Field bioassays with a synthetic blend of the five hydrocarbons elicited attraction and sexual behaviour from male gnats. The triene alone elicited attraction and low levels of sexual behaviour, but the blend without it was unattractive, suggesting that this unusual compound is a key component of orchid pollinator attraction and the female fungus gnat sex pheromone.

Finally, following the discovery of long-chain polyenes in P. orbiculata, I conducted a genus wide survey across 40 species to test the hypothesis that these compounds are widespread in sexually deceptive Pterostylis. I detected large amounts of polyenes in species known or predicted to be pollinated by sexual deception of male Mycetophilidae, but not other fungus gnat families. My results suggest that long-chain polyenes may be important for sexual deception of male Mycetophilidae in other Pterostylis species. 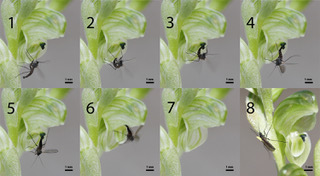 1 approaching labellum appendage from below while wing fanning (abdomen slightly curled in photo); 2 curling abdomen fully through legs and under thorax; 3 thrusting abdomen forwards underneath body and grasping on to labellum appendage with gonostyli (genitalic claspers); 4 torsioning abdomen through 180 °; 5 assuming copulatory position; 6 labellum flips upwards with the male gnat still attached to appendage; 7 male gnat is trapped inside the galea (hood of flower); 8 male gnat with pollinia.