Drakaeinae is a group of terrestrial orchids that consists of approximately 66 species. The members of this group are Arthrochilus, Caleana, Chiloglottis, Drakaea, Paracaleana (now considered Caleana), Thinninorchis, and Spiculaea. Although the number of species is relatively low in Drakaeinae, they can be found in Australia, New Zealand, and New Guinea in various habitats; including woodlands, forests, heathlands and savannah.

For some of the genera we will analyse in this study, there exists no or very little information available on their mycorrhizal associations. The Drakaeinae orchids are iconic and significant as sexual-deceptive orchids in Australia. It is therefore imperative that we learn more about their fungal relationships not only to study the evolutionary relationships of these interactions, but also for future conservation studies of rare and endangered orchid species.

Analysing OMF interactions of Drakaeinae hosts will provide significant information to elucidate the evolutionary processes between orchids and fungi. Because Drakaeinae provides good examples of orchids living in various habitats and environments, and are widespread around Australia, we will have an extensive dataset of mycorrhizal specificity in these orchids. In addition, studying an entire orchid subtribe spanning a large geographic area and various different habitats will enable us to gain a much better insight into evolutionary shifts between orchids and their fungal partners. 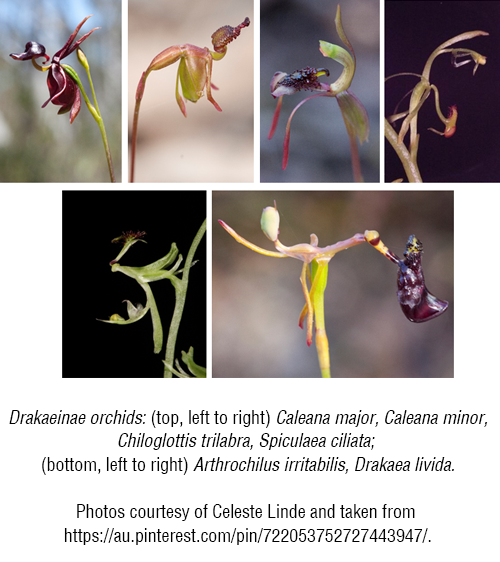 Orchid mycorrhizal fungi (OMF) is essential for orchid seed germination and survival due to the tiny size and lack of endosperm of orchid seeds. Studying the fungal relationships in orchids are important as they provide insights into understanding fungal biodiversity and ecology. My research is exploring whether closely related orchids also have closely related mycorrhizal fungi. To address this, we studied the mycorrhizal associations of sexually-deceptive orchids in the subtribes Drakaeinae and Cryptostylidinae.

Cryptostylis is an unusual orchid genus in Australia since species can be evergreen or leafless and all are sexually deceptive. The Australian orchid subtribe Drakaeinae is an iconic group of sexually-deceptive orchids that consists of approximately 66 species. In this study, we investigated the evolutionary relationships between all six Drakaeinae orchid genera (39 species) and their mycorrhizal fungi. Furthermore, we also included five Australian and three Asiatic species of Cryptostylis, which belong to the orchid subtribe Cryptostylidinae. A total of 20 closely related Tulasnella Operational Taxonomic Units (OTUs) or already described species, were isolated from the Drakaeinae and Cryptostylidinae orchids. Four of them were shared between the two orchid subtribes, with each genus associating with 2-9 Tulasnella lineages.

Cophylogenetic analyses between Drakaeinae orchids and Tulasnella fungi showed both phylogenies are congruent, suggesting coevolution of orchid mycorrhizal fungi and orchids. However, no significant congruency was detected in Cryptostylidinae and their Tulasnella fungi. Coevolutionary relationships are often encountered in e.g. host-parasite relationships driven by antagonistic interactions which lead to reciprocal adaptations. However, coevolution is an unexpected finding for orchid-fungal relationships as fungi are not dependent on the orchid, perhaps explaining the lack of cophylogeny between Cryptostylidinae and their orchids. The observed cophylogeny between the Drakaeinae and their fungi is surprising but perhaps because of a recent and rapid pollinator-driven diversification of certain Drakaeinae genera, entire genera associate with only one or two fungal species, resulting in a coevolutionary signal.

Papers published as a result of this project: