Title:  Understanding the effects of season-of-burn on orchids and their mycorrhizae to inform the fire management of endangered orchids of the Mt. Lofty Ranges of South Australia
Applicant: Alexandria Thomsen
Institution: The University of New South Wales, Sydney

The Mount Lofty Ranges of South Australia is home to a high diversity of terrestrial orchid species, a disproportionate number of which are considered threatened. Although fire is a natural process in many Australian landscapes, changes are occurring to the fire regime and potentially adding to the threats faced by orchids. Orchids have a distinct phenology, where they resprout, flower and enter dormancy at particular times of the year. Historically, fires would occur during summer when orchids are dormant. However, fires can now occur throughout the year, with changes to the season of fire driven by anthropogenic climate change and managed burns in cooler months. In order to inform management of the most suitable times of the year to implement burns in order to best protect endangered orchid species, we need to understand their ecology, including how they respond to different seasonal fires.

Orchids are reliant on mycorrhizal fungi to germinate and to uptake nutrients from the soil. To gain a full understanding of the impacts of fire on orchids, it is therefore imperative to also assess the impacts of changing seasonal fires on orchid mycorrhizal fungi. We have a unique opportunity where we have collaborated with the Department of Environment and Water (DEW) to survey orchids before and after a series of prescribed burns. Funds from the Australian Orchid Foundation will be used to experimentally test how a wide range of orchid species and their associated mycorrhizae are affected by fires occurring in different seasons. 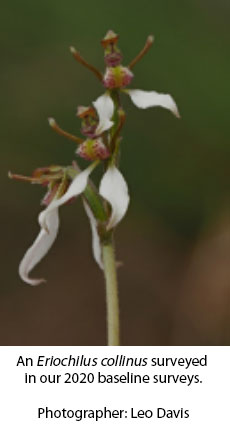