Kevin Barry Collins had a great love of orchids which started early and took him all over the world.  Within the Eastern Suburbs Orchid Society (ESOS , he was a stalwart who kept it going in the lean years and turned this club around to an active and vibrant group.  He was president and on the executive for many years and was at every event, helping wherever needed and always more than willing to share his deep knowledge and passion of his love for orchids.

The achievement of which he was notably proud was the establishment of the Mingara Orchid club to which he gave great support and guidance.  Without Barry this club would not exist today, he was the inaugural president and filled that role for many years.  This club has become one of the most successful clubs in Australia, holding a major show annually as well as its many regular events.

Barry remained active even throughout his illness, often driving long distances to attend meetings, talking to and encouraging members and embracing new endeavours for the clubs.  He encouraged the new growers at all the clubs that he attended and offered sound guidance.  If you ever had a problem, he would steer you in the right direction.

Barry’s contribution to the orchid world was immense and he will be missed by his many friends. 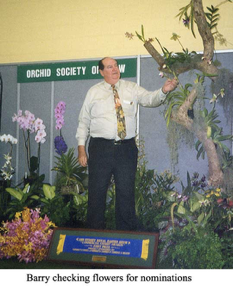