Brian was born in Toowoomba, Queensland on 1 October 1931, but when he was only 5 years old, Brian and his mother moved to Adelaide where, spending all his school and university holidays working in the family market garden, Brian gained his love of growing plants.

Once he finished secondary school, Brian decided to study for a Bachelor of Science at the University of Adelaide.  Brian displayed such ability in his studies that he was awarded a scholarship to do the B.Sc. Honours course, and then another scholarship to complete a Ph.D. in organic chemistry.  Ironically, bearing in mind the fact Brian chose his initial tertiary course because it was shorter than studying Medicine, Brian accepted a further scholarship from the CSIRO to study in Cambridge where he added another Ph.D to his qualifications, as well as a fiancé, because it was in Cambridge where Brian met Lorraine (who coincidentally was also from Adelaide).  Brian and Lorraine married upon their return to Adelaide in 1958.

Brian’s CSIRO scholarship obliged him to work for the CSIRO for 3 years, but he actually stayed with the CSIRO for almost 30 years, by which time he had acquired the grand title of Senior Principal Research Scientist in the wool textile research division, and led a team of about 20 scientists and technicians.  Brian foresaw a natural decline in the need for his field of expertise, and in 1986 he applied for and was granted early retirement at age 55.

Retirement from the workforce only meant that Brian had more time to devote to his passion for orchids.  Although Brian and Lorraine had for many years made frequent trips to Anglesea and the Grampians to find and photograph native terrestrial orchids, Brian first began growing orchids himself around 1970, when the manager of the plant stall at our local scout fete gave him some struck cymbidium back-bulbs that had failed to sell during the day.  Once he was retired, like so many orchid growers, Brian started to squeeze more and more shade houses into the Milligan property in North Balwyn.  Brian soon acquired a heated glasshouse and assembled a beautiful collection of both cool and intermediate growing orchids.  His main interests at first were Cymbidiums, Australian Native Dendrobiums, Sarcochilus and terrestrials, but then he and Lorraine gradually accumulated a large collection of Disas, Masdevallias and his main orchid passion, species orchids, particularly smaller growing species from overseas countries.

In February 1984 Brian attended his first orchid society meeting, and was quickly ‘hooked’. Two weeks later he joined his second Orchid Society, and within a few years he and Lorraine were members of 6 orchid societies.

The next step in Brian’s immersion into orchids was being accepted as a student orchid judge by the Victorian Orchid Club, and then joining the judging Panel of The Orchid Societies Council of Victoria when it was formed in the early 1990s.  Brian’s proficiency with the art and science of orchid judging was ultimately recognised when he was appointed as an Emeritus Judge of the OSCOV Panel, an honour that has only been bestowed on 6 Judges.

In late 1992 Brian joined the Steering Committee that formed the North East Melbourne Orchid Society, and when it held its first meeting in March 1993, Brian accepted the position of editor, a job that he performed admirably until July 2017, after 292 monthly issues.  Brian was also the second President of NEMOS, and held the position of Vice-President of NEMOS for many years.

In the mid-1990s Brian became Liaison Officer on the OSCOV Executive Committee, his main duties being preparation of the annual show judging rosters and writing articles for use in various OSCOV member society bulletins.  From 2000 – 2008 these and other articles were published in book form (the Orchids in Victoria series).  Some of his articles were also published in the national orchid journals Orchids Australia and the Australian Orchid Review.  Such was his interest in writing articles about orchids that between 1998 and 2007 Brian took on the position of editor of the annual Journal of the Orchid Species Society of Victoria.  Not content with his numerous roles in the orchid world, in 2000, after serving for several years as an Associate to the Directors, Brian became a Director of the Australian Orchid Foundation, an organisation which distributes its earnings to worthy orchid research projects in Australia.  Brian held that position for 6 years.

In July 2018 Brian said that when he first retired, an elderly neighbour told him that if he wanted a long, happy life, he should always keep busy.  Brian made sure that he never had a problem in that regard, because as he said “if you make a full-time hobby of orchids, there’s always something that needs to be done!”.

I have known Brian ever since I became interested in orchids, which was around 45 years ago.  I served with Brian on the Committee of NEMOS for around 10 years, and I spent many happy times judging orchids with him, and just talking about our shared obsession with orchids.

Brian was an inspiration to me in the orchid world.  His knowledge was unparalleled, his enthusiasm was uplifting, his commitment to his many roles was extraordinary, and his calm, gentle and professional demeanour was such that he quietly assumed a reverence that might not be seen again in the Victorian orchid community for a long time.

Brian’s passing will create a significant void in the lives of many orchid enthusiasts, but at least we can always be grateful that we are all the richer for having had Brian in our lives.

A donation has been made to the Australian Orchid Trust Fund by the North East Melbourne Orchid Society Inc. 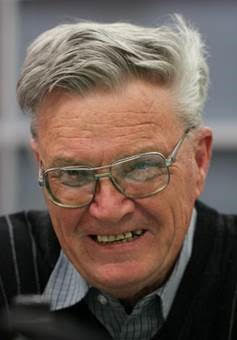