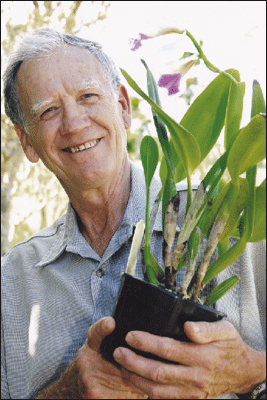 THE GRANTING OF THIS AWARD RECOGNISES:-

That in his position as technical officer with CSIRO, he travelled to relatively unexamined areas in Queensland. Due to his bush skills and knowledge of the Far Northern Region of Queensland these travels enabled him to discover many previously unknown species of orchids and other plants.

That his new discoveries and accumulated knowledge has made him a first contact point for many visiting botanists and zoologists from other parts of Australia and from overseas. He has guided countless visitors to the specimens they sought or to locations for photographic opportunities, making his contribution in these areas beyond measure. He has contributed many specimens to researchers such as David Jones (with whom he collaborated in describing the majority of the twenty new species referred to below) and assisted many overseas botanists. He has been invited by prestigious institutions to participate in several expeditions overseas.

That he has discovered and prepared the formal description of twenty new orchid species in tropical Queensland, including five new Bulbophyllum species, most of which would still be unknown were it not for his efforts. It is noted that his botanical illustrations are excellent.

That he was a member of four of the AOF expeditions to Cape York Peninsula. His local knowledge, bush skills and botanical collecting skills were valuable to the success of these expeditions.

That he actively helps to educate people on orchids, being a regular speaker at orchid conferences and showing many visitors his collection at Atherton.