Christopher Nicholas can rightly be regarded as the patriarch of orchid growers and orchid societies in Tasmania. Chris was born on 25 October, 1923 and grew up in Castle Forbes Bay attending primary school in the area. He completed his secondary education at Hobart Junior Technical School (now New Town High School).

He commenced work with the Public Works Department as a cadet surveyor working on the west coast, living in a tent in winter, cutting tracks through horizontal scrub for the mythical Zeehan to Corrina road.

Chris joined the RAAF at age 18 undergoing training in Australia, Canada and England. He was posted as a navigator to 456 Night-fighter Squadron flying de Havilland Mosquitos over Europe. He was discharged at the age of 21 and returned to Tasmania.

He met and married Phyllis in 1948. They operated a service station for many years and spent much of their leisure time rally driving. When Baskerville Racetrack was being built they were there with their children picking up rocks as construction proceeded. In later years they helped man Targa checkpoints.

Chris joined the public Service in 1960 and retired in 1984. His interest in orchids resulted from Phyl taking him to an orchid show on a September night after closing the Service Station (the Show was open until 9.00 p.m.). She bought him a cymbidium plant and that was the start of a wonderful hobby and lifelong interest. He was known to pay six pounds for a cymbidium back-bulb!

Although he and Phyl grew a wide variety of orchids in their collection, which ultimately became ‘his orchids’ and ‘her orchids’, Chris gradually concentrated on cattleyas, laelias, sophronitis and oncidiums. Many orchid books include articles by Chris in the areas of his expertise and these articles include down to earth information on how to obtain the most fulfilment and enjoyment from this hobby which he loved dearly.

He was president of the Tasmanian Orchid Society in the mid-1960s and served as treasurer for about 30 years. As treasurer he worked very diligently to maintain the Society in the strong financial position it is in currently.

Chris was a highly respected orchid judge and together with Phyl they commenced training courses for new judges in 1963, this training program continuing for forty years.

Chris was involved with the establishment of the Australian Orchid Council and was the Tasmanian representative for many years. He was made an Honorary Fellow of the AOC (an award only given to a special few dedicated and worthy orchid enthusiasts) for his work in promoting the culture of orchids in Tasmania. Chris wrote the initial rules for Orchids Tasmania, the AOC representative body in Tasmania.

Chris and Phyl were actively involved in the formation of The Australian Orchid Foundation in the mid-1970s. They supported the objectives of the AOF in conservation and research of native orchids and spread this message in Tasmania. They were presented with The Australian Orchid Foundation “Award of Honour’’ in 2012 in acknowledgment of their advancement of orchid growing, not only in Tasmania but throughout Australia.

It is difficult to talk about Chris without recognising that Chris and Phyl were partners in life and in orchid growing. They set a standard of culture and presentation that we aspire to reach. Over the years they won many championships and class prizes at shows, and willingly provided information and encouragement to other orchid growers.

In being confined to a wheelchair following the loss of a leg, Chris downsized his collection but not his enthusiasm for orchids. He attended meetings and shows whenever possible, including the Tasmanian Orchid Society Christmas meeting of 2014. He assisted by judging the plants tabled and later told his family it was the most enjoyable night he had spent in years.

A donation has been made to the Australian Orchid Trust Fund by Mrs. Phyl Nicholas. 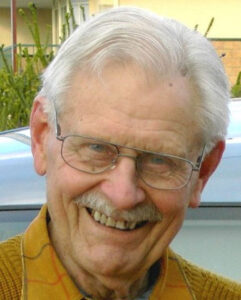