Very sadly we acknowledge the passing of Colin Jennings FAOC on Friday 6 November 2015. At his funeral, Roger Rankin presented a moving eulogy about Colin’s life in orchids and plants. Roger’s text provides the basis for this tribute; thank you Roger.

Colin was a great lover of plants with a wide interest in not just growing them, but also their names including the origin of the name, their taxonomy, and botanical background. He was an amazing resource person in a number of plant areas, not just orchids.

This stemmed from a childhood interest in plants and ultimately while studying at Adelaide University he happened to pass through the John Martin’s Department store (now David Jones Adelaide) one day, to discover the spring show of the Orchid Club of South Australia (OCSA). From then on, he lived his life in orchids.

His back yard was testament to his interest in a wide variety of plants – he imported seed of anything unusual and he’d have a go at growing it; often on the kitchen window sill with something different, unusual and interesting.

He was a prolific producer of magazine articles, contributed to a number of books, such as the AOC Culture books and recently a publication on Eremophilas. But orchids were his greatest love of all.

Roger and I have had a long association and friendship with Colin, and wife Myrnie, spanning 45 years for me and 35 years for Roger. They were involved in pretty much every aspect of the Orchid Club of South Australia where he served terms as President and Registrar of Judges, at one time concurrently. He was also involved in the Club bulletin and all the club shows since the early 1970s. He was elected to Life Membership of the Orchid Club of South Australia in 1980.

Colin became a judge in 1973 and OCSA Registrar of Judges in the same year.

He was part of the Panel that set up the formal AOC Judges Training Course in South Australia 30 years ago. When the Regional Panel was set up in 1998 (as a result of the restructure of the AOC) Colin became Deputy Regional Registrar and played a strong role on the Training Panel up until 2014. In more recent times, he was Patron of Millicent Orchid Society.

Colin was AOC Registrar General of Judging from 1992 to 2014. Each year, Colin and Myrnie hosted a 2-day meeting of the Judging and Awards Standing Committee. Registrars for all seven regions met in their home. Myrnie’s catering was legendary – the mulberry jelly, ginger slice and home dried fruit were highlights. As in all things they did, they worked together as a unified team on the preparation.

He was part of the original planning group for Orchids Australia in 1987, first published in 1988. He has been heavily involved in every edition since that initial release. In 2003 he became Publications Director for the Council, continuing until 2014. In that period he was Registrar General of Judging, Publications Director, proof reader, author of many articles. In 2003 was granted the AOC’s highest honour being made an Honorary Fellow of the Australian Orchid Council Inc.

Roger Rankin worked very closely with Colin for more than 20 years in a unique arrangement that saw Colin as Registrar General of AOC while Roger was Deputy Registrar General. But at the state level, the roles were reversed with Roger as Regional Registrar (SA Regional Judging Panel) and Colin was his Deputy. It proved a very comfortable working relationship for them during which time they really grew to know one another well. In due course it was discovered that they had been married on the same weekend.

Under his leadership, as Registrar General of Judging, great advancements, revisions updates and many new developments were achieved. These included the national adoption of Appreciation Judging, the development of a formal training course and training manual for all new judges to complete prior to appointment. Keeping up with the technological age, the Council changed its awards process from circulating slides to all panels for further judgement, to a system of streamlined digital processing and imagery. This in turn enabled easier publication of awarded orchid images in Orchids Australia and on the AOC Website. Colin also successfully negotiated the inclusion of AOC Award data in the Orchid Wiz digital encyclopaedia. He also commenced negotiations to include Australian orchid award data in the American Orchid Society’s database.

Colin was a storyteller; his experiences were so vast, he had many true stories to tell. So many of those wonderful stories were from his love of orchids and experiences in growing them, searching for them in New Guinea, propagating plants from seed or simply from the shows and conferences around the world that he and Myrnie had attended.

It was Colin’s willingness and openness that endeared him to orchid enthusiasts and plant growers across the world. He was a school teacher by day, but carried that love of educating people into his love of plants and orchids. He was an innovator bringing new ideas to orchids and orchid judging throughout all those years. He shared his cultural knowledge of so many exotic species not previously seen in South Australia in the 1970s and 1980s, but he also was passionate about Australia’s native orchids.

We say farewell to Colin, a great friend to so many. The world-wide orchid community has lost a great man, a positive role model for anyone interested in orchids, and plants in general, a true gentleman, a scholar and mentor. But it the Australian orchid community that has lost a stalwart, an encyclopaedia of orchid knowledge and a true friend of our hobby of orchid culture. 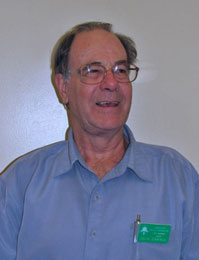