The Australian orchid community lost a great character and important botanical collector with the passing of Ralph on 13th December 1999.

Ralph was a builder, constructing many homes around the Brisbane region. Around 1975, Ralph became interested in native orchids and joined the Queensland Orchid Society, John Oxley District Orchid Society and the Orchid Species Society. A short time later he began to take more of a scientific interest in the local orchids, and later extending his activities much further afield. As his interest grew, he moved to more scientific pursuits gathering specimens for the collections at the Queensland Herbarium and the Australian National Botanic Gardens in Canberra. He discovered the recently described Pterostylis scoliosa in Brisbane Forest Park.

Ralph had a hunger to learn and travelled thousands of kilometres over the difficult back roads of Queensland in his pursuit of orchids; often sleeping in the back of his 4WD. He was the first to carry out any real systematic recording of the orchids of the inland National Parks such as Salvator Rosa and Mount Moffatt discovering a remarkable new Pterostylis aff.woollii in the process. Ralph had a natural ability of finding new species and interesting records. In all, he made over three thousand herbarium collections which were distributed to the Queensland Herbarium and the Australian National Herbarium, Canberra. Included were some 30 taxa, most of which awaits formal descriptions.

Ralph was often discouraged in obtaining the necessary collecting permits and had long battles with bureaucracy in collecting from forestry and National Parks, but true to his character he persisted.

Many of his scientific endeavours were supported by funds from the Australian Orchid Foundation, because it was apparent to the Foundation that Ralph was not only good value for the funds expended, but also the discoveries he made were of great importance.

Ralph had many plans for more trips but all was cut short by the wretched cancer. He achieved so much in his orchid orientated life, he worked hard for it, and gave it his all.

David L. Jones quoted…”Ralph’s contribution to the knowledge of the distribution and diversity of Queensland orchids is immense and possibly unlikely to be surpassed.” 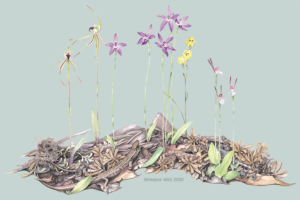