Eric William Wilde was born on the 7th October 1937 in the Melbourne suburb of Moonee Ponds.  He was one of the ‘Old School’, a loving, caring, honest, generous man, a self-sufficient self-starter, teacher and mentor, with an exemplary set of values which he applied in all aspects of his life. His son Mark referred to Eric as a ‘Mr Fixit’, a handy man who could turn his hand to anything.

Eric’s education commenced at Kingsville State School, which included joining Ivy Emm’s Dancing School and performing in pantomimes at the Tivoli Theatre.  After his family moved to Daylesford he attended the Technical/High School until at age 15 when he joined the RAAF as an apprentice Engine Fitter, signing up for 15 years – quite a commitment at that age, but typical of Eric.  After qualifying Eric studied at night school to gain a Diploma of Mechanical Engineering.

Tenacity and commitment were certainly part of Eric’s DNA, exemplified in his long distance courtship of Frances from Wagga.  For 2 years he hitched back to Daylesford each weekend until they married in 1957.

After leaving the RAAF Eric became a teacher at Footscray Technical School before moving to Footscray TAFE to teach Maths, Physics and Engineering for 25 years.  Eric’s early retirement was prompted by his ethical values, as when directed to give all his students a passing grade, his conscience would not allow him to inflict incompetent engineers on future employers and the community.

Eric’s adventures in the Orchid world began over 40 years ago with a chance meeting at a Pub in the Melbourne suburb of Newport, where the publican sold him a couple of Cymbidiums.  On family holidays to Queensland he discovered how cheap orchids were up there, and started bringing carloads back home.  This led to expanding his new hobby into selling native orchids, exotic orchids, ferns and stags at weekend markets, and after attending their first show, joining Maribyrnong Orchid Society to expand his knowledge.

Before his retirement, Eric and wife Frances had moved onto 10 acres at Little River where they spent 30 years.  With the extra space they had about 10,000 orchids in their collection for Eric to look after, and were members of 5 orchid groups.

Of course Eric was an enthusiastic and tireless worker, holding just about every office in these clubs over the years, from committee, president, treasurer, show coordinator/marshal, bulletin editor, new members groups, and became a life Member and Patron of the Maribyrnong Orchid Society.   Eric and Fran hosted numerous activities at their Little River Property, including inter-club get-togethers, glasshouse visits, tuber days, and committee meetings.

Eric and Fran were major contributors and instrumental in running the 18th AOC Orchid Conference and Show, that was hosted by MOS and held in Werribee in 2009.  On interstate trips to attend and contribute to numerous orchid shows and conferences over the years, Eric made many long-term friends.

Eric was invited to be a member of the Australian Orchid Foundation in May 1986 and became its Treasurer in October 1986, a position that he held for the following 18 years. He was elected a Director of the Foundation 1993 and held that position for 16 years. He was a staunch supporter of Gerald McCraith and the work of the AOF.

Another of Eric’s passions was a love of fishing, be it chasing big snapper on Port Phillip Bay, or beach fishing during Queensland holidays.  You cannot help but admire a hardworking, successful and kind hearted man, who enjoyed the simple pleasures of life like a love of community, animals and fishing.

One of Victoria’s great orchid personalities, Eric will be well remembered for his enthusiasm and kind support of other orchid growers, served with his characteristic dry humour and ready smile.

A donation has been made to the Australian Orchid Trust Fund by ANOS Geelong Group Inc. 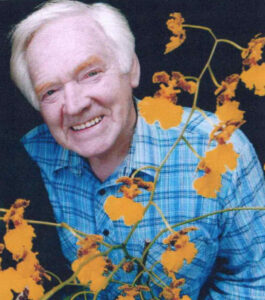