Frank Slattery was born in the Sydney suburb of Balmain on the 8th of July, 1903.

Frank was educated at the Marist Brothers’ School at Kogarah, not many miles from his nursery at Bexley, where he lived for 76 years.

At the age of fourteen years he was apprenticed to the trade of “coopering”, which is the making of wooden casks and barrels principally for storing of beer and wines. Later he foundered his own coopering business, but with the modern production of steel barrels it became obvious that the days of wooden barrels were numbered.

Frank was a keen lover of the bush and on one visit to the North Coast of New South Wales he came across a plant of Dendrobium speciosum var. hilli in full bloom. After returning to Bexley, he called on a fellow cooper, Tom Burns, who had a magnificent plant of Cymbidium traceyanum, in full bloom, growing outside and in a large cask. Here was the beginning of a love of orchids which lasted for many decades.

Frank began a collection from purchases at the few orchid nurseries of the time, plus plants from orchid auctions. The beginnings of an orchid nursery were being assembled. Eventually he bowed to progress and using his private collection as a basis, started an orchid business “Frank Slattery Orchids.” The home was built on a large block overlooking Bexley Gully, with a sheer drop to the road, the slope was readily terraced and benches were installed. Here was a marvellous situation for the growing of cymbidiums, good air movement up the hill and uninterrupted sunshine.

Quality and service was the principle which was adhered to at all times. Frank was proud of his business ethics.

Frank soon joined the Orchid Society of New South Wales (OSNSW); he took interest in the Judging Panel and became a Judge. As the number of Orchid Societies proliferated Frank was soon conducting Orchid Judging classes at the nursery. Many of our Judges were trained by Frank.

Frank joined the committee of OSNSW, and after many years was elected President. In a second three year term, OSNSW was awarded the 6th World Orchid Conference (1969), he was appointed Show Chairman.

Frank improved his stock (and the quality of Australia’s orchids) by becoming the Australian representative for Stewarts Orchids of California and also for McBeans of England, importing quality cymbidiums and cattleyas. He produced a “cracker” orchid in Cymbidium Burgundian ‘Bexley’, a beautiful pink that always stood out.

During his many years of orchid activity, Frank had many overseas trips to World Orchid Conferences, supported by his loving wife Jean. Jean is also an OAM, a qualified floral art Judge and a top class competitor (orchids) in their early days.

A Eucharistic celebration of Frank’s life was conducted at St Gabriel’s Church at Bexley which was well attended by his many friends and family.

We shall remember Frank for his ready smile, his integrity in his business dealings and his wish to help others. 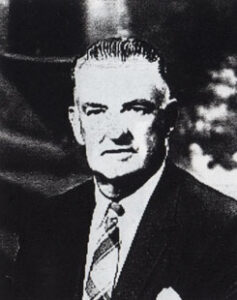