Geoff Stocker was born May 28, 1941 in Lorn, Maitland, NSW and raised on the family dairy farm, Hunter Valley,

Geoff introduction into growing orchids started at a very early age, as a child on the farm.

He was a very clever student earning a scholarship from Maitland Boys High, to commence a forestry degree, Armidale 1957, then at the Australian Forestry School, Yarralumia ACT (Diploma of Forestry) graduating with a BSc(Forestry) University New England in 1963.

Geoff was a crack pistol shot and was Northern Territory champion for ten years and in 1968 represented the NT in the Australian Championships and Olympic trials in Melbourne.

Appointed to the Forestry and Timber Bureau, Berrimah NT, Geoff’s early focus was with establishment of Pinus plantations on Melville Island and elsewhere in the top end and made several visits to Central America to collect Pinus caribaea seed for the Australian Government during 1968. This provided Geoff and his wife, Jacquie, with some insights to the orchid and bromeliad floras of that interesting region for basic pine breeding in Northern Australia.

Geoff’s collection grew steadily with plants grown from imported seeds and flasks as well as those obtained from Australian nurseries.

It was on one of the early trips to Singapore that Geoff was first exposed to the art of flasking. He did clearly recall wandering around to the back of one of the smaller nurseries, to find someone replating orchid seedlings in the stream of steam from a boiling pot heated by an open fire. High tech gear is nice but not really necessary! His kitchen lab started up soon after he returned to Darwin.

In 1971 Geoff and Jacquie moved to the Atherton Tablelands for Geoff’s position as Director of the then Queensland Regional Station (QRS) of the Forest Research Institute, an arm of the Commonwealth Forestry and Timber Bureau. Geoff was Principal Research Scientist and Head of QRS, thence to become CSIRO tropical Forest Research Station in Atherton from 1971- 1985.

In the 1970s several expeditions led by Geoff, Mr. B.P. Hyland, and A. Dockrill visited the Mcllwailth Range and made extensive collections. Many un-described species were found and a reasonably comprehensive plant list was made. As well as this, regular ecological measurements are now recorded from a site in the rainforest near the head of Peach Creek.

Moving from CSIRO, Geoff extended his professional interests to PNG, being appointed Professor and head of the Forestry School at the University of Technology in Lae, and Director of the Forestry Institute, PNG.

Geoff and Jacquie already had an established orchid and bromeliad nursery at their ‘los Cerros’ farm at Jaggan near Malanda and Geoff was able to introduce numerous species new to horticulture especially several spectacular high altitude plants from PNG. He was still working with these until a few weeks before he passed away. He also was working on a new additive to tissue culture media in association with Phil Spence that enabled seed to germinate at a faster rate and to develop larger protocorms and discussed the joint successful findings with Phil 2 days before he passed away.

Geoff was highly respected in the local community and served as a Councillor in the Eacham Shire and then in the Tablelands Regional Council (TRC) and was Deputy Mayor of TRC from 2014 until he retired in 2016.

He co-authored (with Bill Lavarack and Wayne Harris) the book Dendrobium and its Relatives, had a eucalypt (Corimbia stockeri) and two orchids (Dendrobium stockeri and Bulbophyllum stockeri) named in his honour- a fitting professional recognition of his love of botany, tropical forestry and orchids.

He was a quiet, unpretentious achiever who was much admired and respected for his wise counsel to his family, friends and colleagues. The orchid world is diminished with his passing–but is a better place because he was here.

This is a tribute to Dr. Geoff Stocker and our sympathies go out to his wife Jacquie, daughters Lucy and Elise and their families.

A donation has been made to the Australian Orchid Trust Fund by Philip Spence. 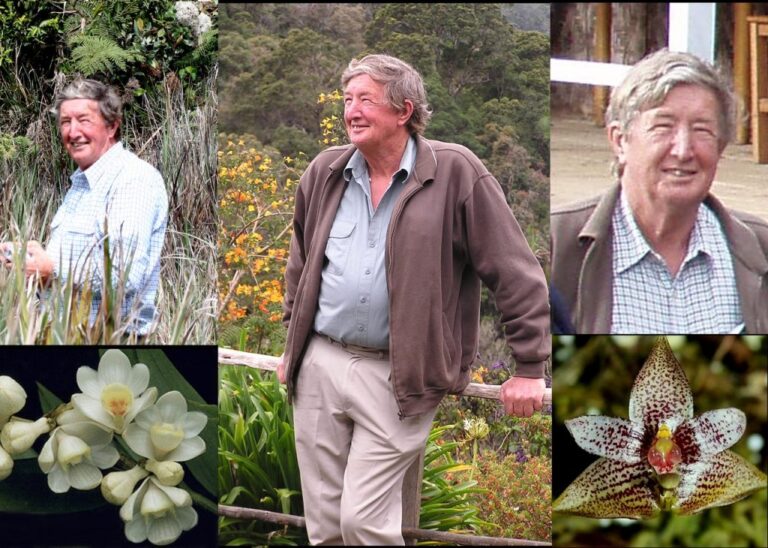