Hermon enjoyed a life-long fascination with the structure of things.

Hermon’s early childhood interest in nature started at a young age. The salt water washing over the rocks at Manly Cove in front of the family home, and the indigenous plants found nearby at North Head, were exciting to a young boy. He was an inquisitive child interested in the many small fish, other creatures, and plants found in the area.

This led to studies in science, particularly an interest in chemistry. Early in his post-university career, his brother Russell and Hermon established an industrial chemical company named Polymer Corporation. Polymer Corporation became actively engaged in research and development, leading to new commercial products including polyester and polyamide resins, epoxy, acrylic paints and glues. Expansion occurred into New Zealand after Australia.

From an early age the beauty and structure of orchids held a special fascination. Hermon recounted that as a schoolboy strolling through the Sydney Botanic Gardens on the way to Sydney Grammar School, he peered with interest into a then small glasshouse and only saw beds of amorphous green. A week later he again peered through the glass panes and saw an orchid now in colourful bloom. Thereafter his orchid passion was ignited! Hermon’s mother Nellie assisted young Hermon to acquire his first orchid – a Himalayan species, Coelogyne cristata, from Woolworths!

Hermon recalled “trembling with excitement” when he first read Sir Joseph Hooker’s account of the discovery of the Vanda coerulea during an expedition to the Himalayas. He visited the homes of orchid enthusiasts including His Honour, Judge H.F. Markell.

This enabled him to view orchid collections and join discussions. It was from this small group of enthusiasts that the Orchid Society of New South Wales was proposed and formally established on 7th August, 1934. His Honour, Judge Markell, became the first President of the Society. The first periodical was issued in January 1936 titled the “Australian Orchid Review”, with Hermon as Honorary Editor.

Polymer Corporation was propelled into the Second World War with the Company dedicating itself to supplying materials for the war effort. High priority products included water resistant mosquito repellent (to avoid malaria) for the Allied troops in the tropics, camouflage paint and smokeless gun powder.

In early 1946 the Australian Government appointed Hermon to an honorary military rank. In this capacity he visited post-war Germany to ascertain Germany’s current chemical/technical knowledge, especially what could be of potential benefit to Australia.

Hermon subsequently assisted in the early establishment of a number of Biological Foundations in Australia and the South-West Pacific. The Papua New Guinea Biological Foundation (PNGBF) in Bougainville had the specific aim of assisting the propagation of new varieties of tropical food species. In Australia, the Australia and Pacific Science Foundation (APSF) and the Hermon Slade Foundation (HSF) provide research grants to tertiary institutions, aimed at preserving bio-diversity whilst enhancing scientific knowledge to provide benefits for the plant species in the local communities, the region and the international community.

On 27th February 1976, Gerald McCraith, Hermon Slade and others established The Australian Orchid Foundation (AOF) to support research, conservation, propagation, education and collection etc. of orchids in Australia and the Pacific.

Following retirement Hermon moved to Papua New Guinea and then to Vanuatu, where he was able to continue his special interest and hobby in collecting and growing orchids. Whilst there he assisted in the undertaking of various scientifically important field trips and supported subsequent publications by international researchers.

Dr Phillip Cribb of the Royal Horticultural Society, Kew, graciously acknowledged Hermon’s close friendship and support which spanned over 25 years. Dr Cribb recalled that whilst Hermon was describing the names of the orchids for a new definitive Vanuatu stamp issue, Hermon pondered over the correct naming of one in particular. Subsequent investigation by Kew Gardens confirmed that it was in fact an undescribed species.

Dr Phillip Cribb stated that it gave Jeffrey Wood from Kew and himself much pleasure in dedicating the orchid and naming it as Dendrobium sladei in the “Orchid Review” of 1982.

In 1985, Hermon generously provided equivalent funding with the NSW Government to construct a new glasshouse to be located in the Sydney Tropical Centre – the Arc, which adjoins the Pyramid glasshouse at the Sydney Botanic Gardens.

One might reflect, did Hermon have in mind the future potential for another young person to peer inquisitively through the glass panes and have his passion ignited?

Hermon found success in life by following his guiding principle: “If there is a way better than another, it is the way of nature.”

A symbiotic relationship with science and nature guided Hermon’s interests, friendships, family and philanthropic philosophy. It was for him “the way of nature”.

Hermon was awarded the Veitch Gold Medal for contributions to Horticulture from The Royal Botanic Gardens, Kew. He was also appointed a Distinguished Fellow of the University of Sydney and also received the award of a Member of the Order of Australia by the Australian Government. 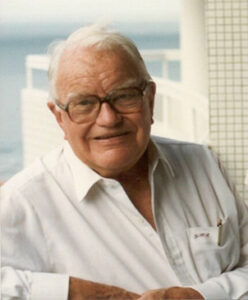