Gerald was a man of many parts. From a humble beginning he made the most of his talents and left a legacy which is on-going.

Gerald lived all his life in Essendon. In his youth he loved swimming in the Maribyrnong River, and played football and hockey with local teams. Later in life he excelled in lawn bowls. He also developed an active interest in photography and became a frequent traveller, both within Australia and abroad.

His formal education ended at the age of 14. He was unable to take up a scholarship at one of Melbourne’s elite schools because his parents could not afford the cost of books and uniforms. Yet his love of education never waned.

In 1930 Gerald married Nell. They purchased a milk-bar/mixed business and while Nell tended the shop, Gerald sold milk door-to-door from churns on a handcart he made himself. This was in the depths of the Great Depression and Gerald used his acquired skills to also make many items of furniture for the family home, some of which continue to be used today.

In 1932 the McCraith family moved to a vacant shop to establish “Mac’s Lending Library”. Again Nell looked after the shop while Gerald did the rounds with a handcart full of books.

During World War II Gerald was transferred to the AIF as a signal instructor. He was en-route to Singapore with his unit when he was re-directed to Darwin, and witnessed the bombings by the Japanese. Subsequently, Gerald made a point on each of his many post-war visits to Singapore to pay his respects at the graves of his fallen comrades.

Whilst Gerald was away in the Army, Nell continued to run Mac’s Lending Library and care for their two daughters, June and Lois.

Gerald was demobbed before the end of the war under a Government Scheme of obtaining food to feed the nation and the Australian Forces. He joined his brother Jack in the rabbit business.

During 1946-61 they processed over 23 million pairs of rabbits, the majority of which were sent overseas to help feed the meat-deprived populations of the United Kingdom and Europe.

Jack and Gerald pioneered the use of refrigerated transport to bring wild rabbit carcasses to be processed in Melbourne from as far as the Western Australian border and Queensland. J.A. & G. McCraith Rabbit Exporters, traded for more than 40 years until the mid-1980s, and was the last company in Victoria to hold a rabbit export licence.

Gerald was first introduced to orchids at the age of 14 years. He purchased his first orchid plant in 1931 and soon after joined the Victorian Orchid Club (VOC). Gerald later became President of the VOC from 1959-62. He assisted in the formation of a number of new suburban and country orchid societies.

Gerald was a member and life member of many orchid societies, both in Australia and overseas. He was also a Patron at Maribyrnong Orchid Society and had orchids named after him. Gerald loved all orchids, particularly those species orchids from Papua New Guinea, Australia, South America and Asia.

In 1960, Gerald assisted Sir John Hall-Best in forming the Australian Orchid Council (AOC) as the co-ordinating federal body for all Australian States. He became its first Vice-President and in 1963 its second President. The AOC provided Australian orchid growers with an official voice overseas.

During Gerald’s term as President, the arrangements were made for the 6th World Orchid Conference, held in Sydney in 1969. Gerald initiated the AOC’s orchid slide program library; he was the Program Director for many years with many of the 103 programs being compiled by him.

In 1967, he was awarded an Honorary Fellowship by the Australian Orchid Council for his work for the AOC.

In 1974, following orchid trips to Papua New Guinea and Northern Australia, Gerald and his close friend Hermon Slade established The Australian Orchid Foundation (AOF). The general objective of the AOF was to provide a vehicle for the funding of relevant scientific orchid research projects and related orchid activities within Australasia. This non-profit foundation, through its expert Research Committee and registered Board of Directors, provides grants for recommended research projects and manages funding for many aspects of Australian orchids in Australasia. Gerald became the inaugural Chairman of Directors of the AOF in 1974 and stepped down as chairman in 1994. He remained a Director until he retired in February 2008.

Gerald was also a member of a number of international and local Orchid Committees, including the Research Council of the American Orchid Society, President of the Odontoglossum and Allied Genera Society, and a foundation member of the Australian Native Orchid Society, Victoria Group.

Gerald attended every World Orchid Conference (WOC) from the 4th in Singapore until the 17th WOC in Malaysia in 2002. In 2005, at the 18th WOC in France he was awarded the Orchid Society of South-East Asia Fellowship for his “Contribution to Orchids”.

At the local level Gerald personally raised thousands of dollars for the AOF through cultivation and sale of Odontoglossum and Disa orchid seedlings, and from the acquisition and sale of orchid books not generally available through general bookshops. Gerald acted as a catalyst to get things going and was always thinking of new ideas to raise money for the Foundation.

Even into his late 90’s he instigated an Orchid Awareness Program directed to every Australian Orchid Society’s membership. This comprised the provision of interactive articles and activities designed to stimulate, question and revitalise interest in orchid culture and conservation. This was a resounding success.

In 1993 Gerald was awarded Membership of the General Division of the Order of Australia (AM) for his “services to horticulture, especially in the field of orchids”. Many thanks are extended to Ron Kerr, Jean Slattery, Helen Richards and others for bringing Gerald’s achievements into the public arena. Gerald was very humble to have received this award, for as he said “he was the figurehead, but hundreds worked so hard in the orchid fraternity”.

Gerald was a family man, furniture maker, businessman, an autodidact, sportsman and a lover of orchids.

Gerald’s favourite saying was ‘Every day is a good day’ and this is how he will be remembered.

So sadly missed by Gerald’s daughters, June and Lois, and Granddaughters, Bin and Kerryn. In remembrance of their father and Grandfather, Gerald:

Gerald was a man of his time and his time lasted 100 years. 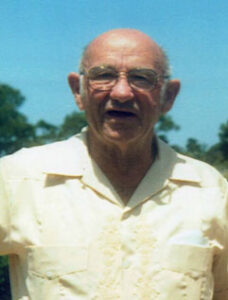