James was born at the family farm on the banks of the Manning River in Wingham, NSW.

A secondary education was received after obtaining a scholarship to Hurlstone Agricultural Boarding School in Sydney.

A love of aircraft soon saw him join the RAAF where he remained for the next 6 years. Following this, the remainder of his working life was spent as a flight engineer with Australian commercial airlines.

At age 18, James purchased his first Cymbidium orchid as a gift for his mother. This orchid was divided many times over the following years. After his Mother’s death, the orchids were brought to Melbourne. Thus began a 50 year love of orchids.

James attended the first Maribyrnong Orchid Society meeting and remained an active member until his death. His favourite orchids were Sarcochilus and Phalaenopsis. Constructing his own laminar flow cabinet, he made many hybrids among them Sarcochilus Kate, Sarchochilus Wilde Rose and Phalaenopsis Manchester Princess.

The last 10 years of his life saw his passion of Phalaenopsis fulfilled and the heated glasshouse looked a picture for six months of the year.

The homemade laminar-flow cabinet was always in use. For many years the AOF Seed Bank was managed by James. With health failing he handed over the position to Dick Thompson.

A donation has been made to the Australian Orchid Trust Fund by Mrs. Margot Lattimore. 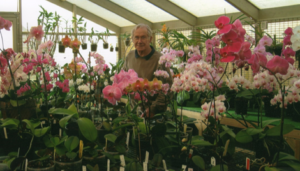