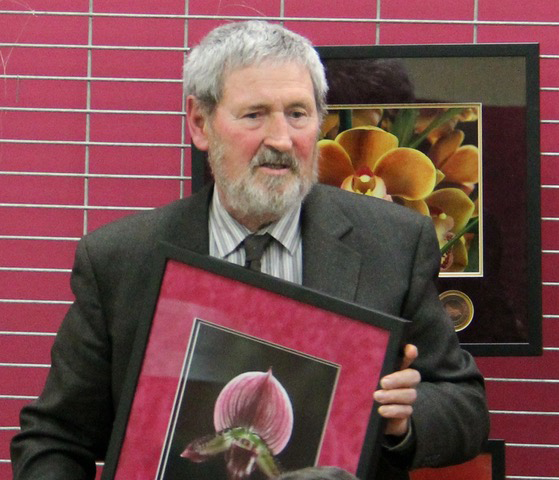 THE GRANTING OF THIS AWARD RECOGNISES:

You initially approached orchid growing with great enthusiasm, building glasshouses to suit the genera grown and seeking knowledge from authorities around the world.

You co-founded the Maroondah Orchid Society and are a Foundation member of five other orchid societies.

You have held the Victorian Orchid Society/Australian Orchid Council positions of Victorian Registrar of Judging and the Registrar-General of Judging. You co-authored a re-write of the AOC Judging Handbook

You led the movement that formed the Orchid Societies Council of Victoria, were its President for the first six years and were appointed as its first Patron in acknowledgement of its creation and success.

You co-wrote the OSCOV Judging Handbook and introduced appreciation judging as the primary OSCOV approach.  You were a judge at two World Orchid Conferences.

You have been guest speaker innumerable times at orchid societies in Victoria and around Australia and presented a paper at the Auckland World Orchid Conference in1990.

You established Atlantis Orchids in 1977. You have made award-winning hybrids and have won many awards. You developed a successful fertiliser, SuperBrew, and produced three widely viewed educational DVDs.

You have written countless articles for publication, especially in the ‘Orchids in Victoria’ series that are still regularly reproduced in societies’ newsletters.

You are one of the elder statesmen of the Victorian orchid community, much loved and universally respected for your contributions to generations of orchid enthusiasts.