Ken was well respected and admired for leadership and generosity.  Ken was a life member of Warringal Orchid Society, where he previously served as a President and held various committee positions for many years.

I have known Ken since I became interested in orchids in late 2006.   Ken was the person who welcomed me to the club and gave me a club plant as a new member.  I worked with Ken as a show marshal and assisted with setting up the show until he retired.  We enjoyed talking about the orchid shows and our love of different genus of orchids. His commitment to his role was extraordinary and professional. Ken was very generous in sharing his wisdom, knowledge and experience.

Ken inspired me to grow different types of orchids such as Paphiopedilum and Promenaes which I never considered.  He gave me my first Paphiopedilum to grow which I still have today. He often encouraged and gave me different types of orchids to grow. He said to me that growing orchids have given him a lot of joy and he wanted to also share this passion to others. One of the orchids that Ken gave to me has won a quality award.  Unfortunately, the orchid received the award just 6 months after he had passed away. He would have been proud. His knowledge was vast and his enthusiasm about orchids was indescribable.  His calm, gentle, enthusiasm and generosity have touched me personally.  Ken was a person who often gave things away happily and never asked anything in return, a special characteristic which is rare nowadays.

I remember that Ken often whispered to me after the setting up of the orchid show that “The set up looks very good doesn’t, I am sure that the show will attract a lot of visitors this year”.  His positive attitude always inspired me.

Even though Ken’s health declined toward the end, he had continued to come, visit and talk to us at the shows.  Ken is missed by all of us, especially me.

A donation has been made to the Australian Orchid Trust Fund by Mrs. Kim Lam. 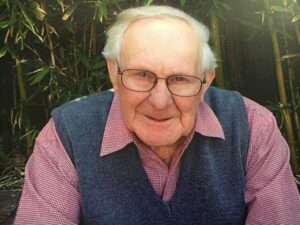