Kevin was born on the 1st July, 1922 in Mareeba, far North Queensland, one of nine children of Jack and Winifred McFarlane. Kevin grew up in Cairns and the surrounding area. He died in Cairns (where he spent most of his life) on the 2nd of December, 2009.

He enlisted in the 2nd World War into the Australian Imperial Force on the 30th March 1942 as Private Kevin John McFarlane in the 15th Australian Infantry Division, service number QX31111 for operational service in New Guinea, the Solomon Islands and New Britain. He was wounded in action in the Solomon Islands and carried out by the ‘Fuzzy Wuzzy Angels’ as they affectionately became known. He was discharged on the 21st May, 1946. He was mentioned in dispatches and received two Pacific Star Medals.

After the war Kevin met and married his first wife Gwen in 1947. They had two children Dianne (Tina) and Lloyd. Kevin worked as a barman, cane cutter and prospector for wolfram in the Mt Carbine area. Kevin had been married for 5 years when Gwen tragically died after a short illness. To help recover from the shock he travelled around Australia on a working holiday.

When Kevin returned to North Queensland he went prospecting in the Palmer River area. While prospecting he pegged out some ground which later became known as the Dianne copper mine, named after an aboriginal friend Dianne.

He first became interested in orchids in 1948. While prospecting on horseback he came upon a rocky outcrop of Cooktown orchids which he described as ‘alive with a mass of purple blossoms, a fantastic sight’. He collected only a few to see how they would grow in cultivation. He was surprised how tough they were only tied to ti-tree sticks, surviving year after year. This was the start of something great.

In 1956 he met and married Elizabeth (Beth) Fallon. Kevin and Beth purchased a house at 26-28 Goodwin Street, Edge Hill, Cairns, straight after the 1956 cyclone Agnes. The property was littered with trees and branches but they immediately saw the potential and beauty of the place. They loved the location, next to the Botanical Gardens. Together they had four children, Peter, Karen, Deborah and Janine.

Kevin acquired a few exotic type hybrid orchids and joined the local orchid society. He built three orchid houses and soon had 30,000 terete vanda plants nestled in coconut husks stretching from the front gate to the front door. Once Kevin gained the knowledge of growing his plants successfully he decided to try hybridizing and flasking (embryo culture). Little was known of the process in the late fifties.

He wanted to specialize in Dendrobium breeding, especially the Cooktown family, because of his first encounter with them in nature. He managed to save and grow a few plants from flasks, but was disappointed at his success rate and the slow growth of the plants. A single plant would only grow a single growth per year. He felt there must be other members of the dendrobium family that would be more prolific growers and compatible parents. At that time a friend in New Guinea sent him some seed of that Islands species to flask. The description of these plants was just what he was looking for… unfortunately most didn’t survive. He was frustrated, and knew that he would need to gain more knowledge in flasking techniques if he was to succeed with his breeding plans.

The 5th World Orchid Conference was being held in Long Beach, California in 1966, Kevin had a sister living there, so, scraping some spare cash together he attended the Conference. His main aim was to gather more information on flasking. The Americans were helpful and put him on the right track. He exhibited some of his Dendrobiums at the Conference, they were non-competitive, but he received enough attention to give him some encouragement. His first taste of success came in 1970 when plants of his intersectional crossing involving the New Guinea species began to bloom, creating a ‘new look’ orchid hybrid in Australia. These grew faster and bloomed all year round, with more beautiful blooms. The crossings were an immediate success. He registered the hybrid as Dendrobium Impact. One plant won the prestigious gold medal at Frankfurt, Germany in 1975. This was the only gold medal won for Australia at the 8th World Orchid Conference.

A breakthrough was established in 1981 with a hybrid he created involving Dendrobium speciosum. This hybrid was an incredible improvement on both parents, producing beautiful long lasting blooms on the stem. The first plant to flower was exhibited at the New South Wales Winter Show in March 1981. It was awarded a HCC, an AD and awarded the Pre-eminent Orchid of the Show. This hybrid is registered as Den. Australian Beauty.

Kevin was the first hybridiser to venture into striping and was the originator of the famous Dendrobium Candy Stripe. These orchids were most sought after all over the world. Much work on hybridizing since that time has improved the blooms resulting in a Silver Medal at Miami in 1984.

In 1975 Kevin was awarded a Fellowship of the Australian Orchid Council (FAOC), this award was given in recognition for his work in hybridization of the genus Dendrobium.

In 1984 Kevin was a finalist in the BHP awards for the pursuit of excellence for orchid growing and hybridizing.

Kevin had become a perfectionist in his work with orchids, which earned him an abundance of awards and medals.

Kevin had the good fortune to retire at the age of 48, after selling the Dianne Copper Mine. The mine was said to be the largest copper export mine in Australia at the time. The Australian Taxation Office had changed their law not long after Kevin sold the copper mine and wanted a piece of the action. Kevin was genuine that he had pegged out the mine as he was prospecting and did not know its potential. He was able to prove this in the Supreme Court and won his case. This was another test that Kevin overcame. This enabled him to pursue his lifelong love of orchids. Both he and Beth followed their passions, his orchids, hers yoga.

Kevin’s dream was to have the family interested and create a business in orchids. In 1978, Karen took up the challenge and started a flasking business selling Kevin’s hybrids. They started travelling together to many Orchid Shows and Conferences around the globe, eventually Karen presented Kevin’s papers. Later other family members joined in, all adding a different gift and story to the McFarlane Orchid ventures.

Kevin attended the Honolulu orchid show each year and became an honorary life member of that society. He loved to visit and see his many friends; Ben Kodama, Richard Takafuji, Dr Sigawa, Ted Green and his favourite Hawaiian girlfriends Dora and Violet.

A quote from Ted Green to Kevin’s family on Kevin’s passing “One of the fondest memories of your crazy dad was going collecting with him, he was barefooted, in shorts and wearing an old singlet, climbing barbwire fences, snake infested grass and mangrove swamps, it did not faze him. That’s the way I will remember him.”

While specializing in Dendrobium breeding, other orchids that he had a great love of were; Phalaenopsis, Vandaceous, Paphiopedilum, Oncidiums and Cattleyas. He grew many world class orchids and won Grand Champion Orchid with Vanda Gordon Dillion ‘Cairns’ at Expo 1988, Caloundra. Other notable wins for Kevin were:

In 1992 at the 4th APOC (Asian Pacific Orchid Conference) held in Chiang Mai, Thailand he met up with his great friend from Thailand Professor Rapee Sagarik who he has great respect for and attended his Buddhist ceremony of shaving his head and going into the monastery after his mother died. This was a great honour for Kevin. Other great friends and colleagues include, Dr Uthai Charanari, and Mr Chitti Ratanapenchai of the Bangkok Flower Centre. They took him travelling to the north eastern part of Thailand where he saw many orchid species in flower. Thailand was very close to his heart, he loved the people, food and he loved to talk and laugh about the adventures there. His other close friend in Thailand was Phairot Lenavat, who would take Kevin around the Nurseries on his many visits to Thailand. Kevin had Karen represented and exhibited for him at the 5th APOC in Fukuoka, Japan in 1995.

Kevin travelled to Japan with his wife Beth and met and formed a lifelong friendship with Mr Mikado Hanajima. Hanajima gave them a wonderful experience in Japan which Kevin was so grateful for and never forgot. The friendship was also extended many times to the family when they exhibited at the Japan Grand Prix.

Kevin had another great travelling companion, the late Bill Smoothy. They both shared a passion of orchids, travel, other cultures and laughs. One of Kevin’s favourite outings was to attend Rusty’s Market in Cairns every weekend, where he would meet his orchid mates and discuss the latest orchid news. Kevin registered hundreds of hybrids in a variety of genera, including orchids named after his wife Beth, daughters and granddaughters.

Kevin and Beth loved living at Goodwin Street, Edge Hill, which was located next to the Botanical Gardens and is commonly known to locals as the cultural precinct of Cairns. Kevin, having lived there most of his life was a great advisor to all the Curators past and present of the Flecker Botanical Gardens and shared much knowledge and support on tropical orchids and plants. When he would travel overseas he would come back so enthusiastic and would love to bring back to his backyard new and exciting knowledge and plants. He is fondly known as “the barefoot guardian of the Botanical Gardens”.

Kevin and Beth loved having the family and friends over at cocktail hour. They would get the sunset over the palm trees, a cocktail in hand and some of Kevin’s ‘ho-down’ music. The one requirement was that you “let go of all your troubles and hang loose”. Kevin loved to see people having a good time laughing and being in the moment. His love for beauty and joy rubbed off on everyone.

We are so grateful to have shared this amazing journey with Kevin and Beth, their spirit will live forever in our hearts.

Tribute by Janine McFarlane with contributions by Karen McFarlane 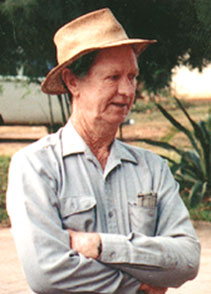 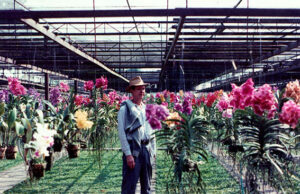