Madge was born Madge McArthur at Tatyoon in Western Victoria on 13th May 1904 and died at Box Hill on 21st November 1999. She met her future husband, Edgar Bartrop at Ballarat High School in 1920. They married in 1927 and established a house and garden on a block of land opposite Lake Wendouree in Ballarat.

Before her marriage Madge was a primary school teacher in Kingswood, Bacchus Marsh and Ballarat, but these were times when married ladies were barred from working in the Education Department and she was required to resign from teaching prior to her marriage.

Madge led an active life in Ballarat and served on the committee of many local organisations. She was a Life Governor of the Ballarat Children’s Home and at various times President of the Ballarat Branch of the National Council of Women, Ballarat Music Lovers Society, Literary Societies and Garden Clubs. In the early days of Regional Television she gave book reviews on Ballarat and Western Victoria TV station BTV6.

Gardening was one of Madge’s lifetime interests. The plans for the house built in 1927 included a back veranda with a concrete floor and wooden benches for the growing and display of plants in pots. The long outside wall faced east and was of glass from bench height to the eaves. Roller blinds fitted to the windows could be lowered to shade the plants on hot summer days. Madge grew ferns and ‘indoor’ plants in this area. In the 1940’s she began a small collection of Cymbidium orchids. The orchids were in terracotta pots and grown in a mixture of rotted oak leaves and gravel. They flowered each year and multiplied. There was no orchid society in Ballarat at that time, but there is little doubt Madge would have been an active participant had one existed.

Near the end of her days, Madge lived in Melbourne and was a member of North East Melbourne Orchid Society and the Orchid Species Society of Victoria. By then her eyesight was limited but she found joy in the displays and shows of these and other metropolitan orchid societies.

One of the plants growing in Ballarat with the orchids was a fibrous rooted Begonia semperflorens with large pink double flowers. This plant was grown by Madge’s mother. Madge became responsible for it in 1916. The plant renews itself each year and still survives, now in Melbourne.

A donation has been made to the Australian Orchid Trust Fund by Edgar Bartrop. 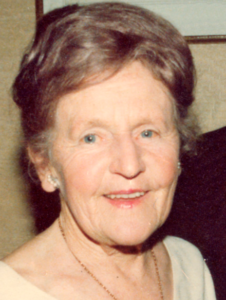