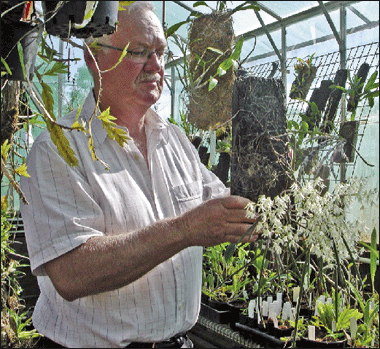 THE GRANTING OF THIS AWARD RECOGNISES:-

You have held a position at the Australian National Botanic Gardens/Centre for Plant Biodiversity Research for over 30 years where you have conducted research into orchids, particularly Australian species.

You have applied knowledge gained from ecological studies into mycorrhizal interactions with orchids to germinate seeds of critically endangered orchid species in Australia and overseas.

You were the first to germinate seed of the critically endangered orchid Diuris fragrantissima, and have been heavily involved in its conservation.

You have presented a new phylogenetic classification of the Orchidaceae subfamily Orchidoideae, based on detailed studies into the embryology and protocorm structure of the Diurideae and related primitive orchids.

You have been involved in the description of many new species based on morphological and molecular studies.

You have used knowledge gained from ecological studies to aid the conservation and translocation of some rare terrestrial species in South-eastern Australia, especially the Eastern Underground Orchid (Rhizanthella slateri).

You have shared your specialist skills by training students, carrying out collaborative research with other scientists, publishing scientific papers, giving seminars to various scientific symposia, and talks to interest groups, including orchid societies.

You have been a member of the Research Committee of the Australian Orchid Foundation for more than 20 years.