Murray James Gibson Corrigan was born at Hay, in regional NSW, on 27th June 1931 to a pastoral family.   He came to Sydney as a boarder at Mowbray Road Grammar School in the early 1940’s, and it was during this time his life-long interest in orchids began.

Murray Corrigan was one of the central group of foundation members who planned and established the Australasian Native Orchid Society in 1963.   As a member of the formative committee that laid the groundwork prior to the inaugural meeting on 6th July 1963, Murray joined with the likes of Bill Murdoch, Walter Upton, Eric Gordon, Steve Clemesha, Ron Kerr and others to produce an ANOS Constitution, which included the Objectives of the Society.  At that inaugural meeting, Murray was elected Editor of The Orchadian, a role he held from 1963 to 1977.

Murray held the position of Editor of The Orchadian for 14 years, longer than any other subsequent editor, and during that time he worked tirelessly to ensure the quality and accuracy of the journal.   As Editor, Murray developed a team of contributors to The Orchadian, including many influential and authoritative authors.  Notably, Alick Dockrill was one of the most prolific of those early writers.  Murray encouraged both scientific and cultural articles, and was always able to fill the pages of the journal with fresh and interesting material.  From its inception, The Orchadian was recognised as an internationally important publication dealing in the science and cultivation of Australian native orchids.  Murray was granted Life Membership of ANOS in 1975 for his outstanding service to the Society as Editor of The Orchadian.

In all, Murray was a member of ANOS Council for 18 years, with a hiatus between 1979 and 1984.  Murray served as President of ANOS from 1986 to 1988 a role he filled with dedication and purpose.   Meetings were always lively under his chairmanship.  He was never short of an opinion and he encouraged other members to express their thoughts.  At times he could be quite stern, if he thought the situation required it, but generally he was even natured, gentle and good-humoured with those around him.

He met his wife-to-be Joan whilst working for a large pharmaceutical company in Sydney.  After marrying, they bought land and built a house at Elanora Heights, on Sydney’s northern beaches in 1967, where they raised two children, Samantha and Adam.  Murray’s great friend Wally Upton lived just a few streets away.  In the backyard, Murray grew a wide range of orchids in a large unheated glasshouse, and also in a shadecloth covered bush house.  In addition, he had many orchids growing on slabs which he hung over and around a large fish pond.  His main focus was Australian native orchids, species in particular, but he also grew many exotic orchids.  His famous plant Dendrobium kingianum ‘Corrigan’s Red’, which won for him a Gold Medal for Pre-Eminent Exhibit at the OSNSW Sydney Town Hall Show in 1968 is still a fine, strongly coloured, free flowering example of this species.  In later years he developed an interest in Stanhopea species, and he amassed a large collection, many of his baskets hanging on a shade covered frame beside the glasshouse.

A gregarious, sociable and articulate man, Murray enjoyed the company of others.  He was one of those larger than life characters, a big man with a big personality.  He stood 6 ft. 2” and wore size 12 shoes.   As a speaker, he was engaging and entertaining.  He liked having the floor and filling the room with his powerful voice.  He always spoke with great confidence and knowledge, and was able to carry an audience with him.  He enjoyed nothing more than having a few friends around the dinner table, with a hearty meal and bottle or two of good red, chatting, laughing and telling stories, sometimes about orchids and sometimes not.  Murray was a generous man with a big heart, always willing to share his knowledge and his resources.

As much as he loved collecting and growing orchids, Murray was also a collector of orchid books.  He had a huge library of thousands of orchid publications and other reference materials, all catalogued and neatly arranged in his study.  Indeed, he was a sucker for any new orchid book to add to his collection, and vendors at orchid fairs had no trouble in persuading him to purchase a new publication or two.  His ability and willingness to research a particular orchid related topic was legendary and, if the interest took him, he would spend many hours poring over his books to extract every last detail.

From its inception in 1977, Murray was deeply involved in the compilation and production of the ANOS Checklist of Australian Native Orchid Hybrids.  He was Senior Editor from 1988 to 2005 and he maintained the lists, originally on a card system, and later on a data base.  He was meticulous at checking the breeding background of each new hybrid to ensure eligibility, and his Family Tree calculations represented an enormous amount of work.

Murray was a Foundation Member of ANOS Sydney Group when it began in October 1963.  However, once ANOS Warringah Group was formed just one year later, then that became his local group.  As a Foundation Member, he maintained that affiliation for the rest of his life, for many years as Patron of the Group.  He served the Group in many capacities, including as President.  In 1990, Murray was awarded Life Membership of ANOS Warringah Group.

Murray was a long term member of both OSNSW and North Shore Orchid Society and he had many friends in those societies.  He served NSOS as a committee member in various roles for well over two decades, including 4 years as President, and he was also awarded Life Membership of NSOS.

Murray was a long-standing member of St. Ives Orchid Fair Committee, which conducts the annual orchid fair and show at St. Ives Show Ground.   He was justly proud of the continuing success of this event and greatly enjoyed the camaraderie generated each August during the fair.  He was in his element moving through the crowds, greeting people, shaking hands, chatting and catching up with old friends.

Outside of orchids, Murray was a keen and very skilled fisherman, with an enormous collection of rods, reels, and other fishing paraphernalia.   Murray was President of NSW Fishing Clubs Association from 1980–1984, and again 1995-1997.  He was also President General of Australian Anglers Association 1981-1983.

Murray was involved with Stony Range Botanic Gardens at Dee Why as a volunteer worker and consultant for over 50 years.  He was a member of the management committee and also served as Chairman for a time.

An author, editor, secretary, correspondent, photographer, designer, speaker, story teller, field naturalist, plant grower and propagator, orchid judge, consultant, conservator, administrator,  librarian, book collector and historian, Murray truly was a renaissance man, with many and varied interests.   In particular, his remarkable efforts over many years contributed enormously to the establishment and continued well-being of ANOS, and there is no one to whom the Australasian Native Orchid Society owes a greater debt than Murray Corrigan.

A donation has been made to the Australian Orchid Trust Fund by ANOS Warringah Inc. 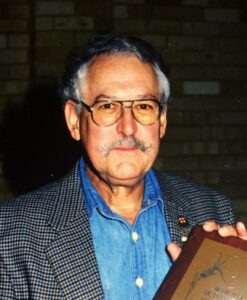