Norma came to Bega on the far South Coast of New South Wales in her early 20’s to work as a Nursing Sister at the Bega Hospital.

In her youth, Norma regularly visited a relative’s farm in the Gloucester area north of Sydney, where many Australian native orchids grew naturally, and so developed a love of orchids which was to last all her life.

Norma was instrumental in the formation of the Sapphire Coast Orchid Club in the early 1980’s. She served 10 years as president and some 12 years as secretary. Her contribution to this club can’t be measured as was her friendship and generosity which had no bounds, particularly when it came to orchids. Her nursery at Kalaru NSW became a favourite meeting place for orchid growers as well as friends from far and wide. She counted all of the orchid community as her friends, and as an orchid judge earned great respect for her knowledge, common sense and natural manner.

Many times she and other judges would leave at four or five o’clock in the morning to judge at shows up the coast. She showed great leadership qualities and had the happy knack of getting from people more than they thought they had to give. Many took on positions on committees, officers of the club, became judges and show marshals and would never have thought themselves capable of such responsibilities. Everyone felt that they were special to Norma, and they were.

Her passion for orchids knew no bounds and along with Dennis Diem and others she established the South and West (NSW) Regional Orchid Conference and Show, which is convened every two years alternating between clubs on the coast and inland. The Trophy for the most successful Club display has been dedicated to Norma’s memory.

Whilst she enjoyed the whole gamut of orchid genera, she had a special place for cymbidiums and was a member of the NSW Cymbidium Club for some years.

Her last official outing was to the National Show at Port Macquarie in 2006 at which she judged and also caught up with many old friends. She also came away with quite a few new plants.

Norma’s other passion was her family. She is survived by five children and fourteen grandchildren and she loved each and every one dearly. Her passing has left a huge hole in her family and in the Orchid community, locally as well as in the wider scene.

A donation has been made to the Australian Orchid Trust Fund by the Sapphire Coast Orchid Club Inc. 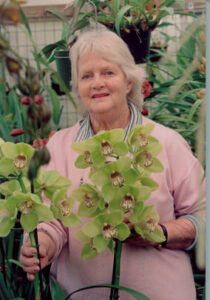