Pam, as we knew her, was born in Wilmot, a quiet country town 40 kilometres south-west of Devonport in northern Tasmania. At the end of WW2 her father purchased a truck from his father for 40 pounds and carted mainly potatoes from Wilmot to Devonport. He also drove the school bus. Her family moved to Devonport when Pam was four years of age. Her father established a trucking business and had the contract to deliver school milk. When he died at the early age of 48 her mother carried on the business and raised her two daughters.

Pam’s mother Ruth and Mr. Alec Buchanan, were two of the founding members of the Devonport Orchid Society. Pam attended the meetings with Ruth and her interest in orchids started from there. She preferred the more exotic orchids, and often spoke of her fondness for paphiopedilums. She also grew sarcochilus, other Australian natives and cymbidiums.

Pam joined the Devonport Orchid Society in 1975 at the age of 27 years. The Bartlett’s were keen exhibitors during the 1970’s and welcomed many judges and visiting speakers to the city and to their home. Later in life Pam concentrated on judging and did not exhibit.

She was a member of all four Tasmanian Societies where she was always generous with the monthly raffles and also over the years she donated many prizes at shows. Pam held positions within the Devonport Orchid Society including treasurer and newsletter editor. She was awarded a Life Membership in 1993 for her service to the Society.

She attended many Australian orchid conferences, her first in 1973. Judging really interested her and she became an Australian Orchid Council Judge in 1985, and travelled to overseas conferences to judge, and to enjoy the fellowship and social interactions with the many friends she made.

Pam loved collecting items associated with orchids. This included crockery, jewellery, books, linen and stamps to name some. I can recall receiving phone calls to tell me of her latest purchases, sometimes for herself or for the National Trust property, Home Hill. She loved going to auctions.

Pam was always interest in the administrative work of the orchid societies, a legacy that stemmed from her secretarial work with firm Clements and Marshalls. She also held the positions of chairperson and secretary/treasurer of Orchids Tasmania and rarely missed a meeting.

Pam was a regular attendee at the Australian Orchid Council (AOC) meetings, and in October 2006 was the first woman to hold the position of President of the Council, a position she held for the maximum term of three years. I accepted the challenge of her invitation to be the Council Secretary during this time and I owe it to Pam who paved the way for me to maintain an interest in the Australian Orchid Council. The following three years she was secretary to Deane Johnston and also served some time as Vice-President.

Pam maintained her interest in judging; realising the need for extra judges in Tasmania she became committed to attracting and training new judges. Only three days before her passing she attended the Ross Fun Day, (an annual event organised by the Tasmania Orchid Society) where she mixed with fellow growers, friends and acquaintances, and joined in the AOC award judging.

She had many other interests in her life and these included the National Trust, the Arboretum, the Family History Society and Home Hill in Devonport. The latter was the home of Joseph and Dame Enid Lyons, and Pam often spoke of members of the Lyons family.

She had also spent several years previously working in England, and spent many a late night viewing the Tour de France telecasts, and tennis tournaments, catching glimpses of familiar scenery which she had visited in her travels.

Pam carried on with the huge garden established by her late mother and she had a particular liking for irises, fritillaries and roses, especially the white ‘Iceberg’ rose.

In remembrance of her contribution to the Australian Orchid Council, an Iceberg rose has been given to her sister Rosslyn to be planted as part of a ‘remembrance’ row of roses in her garden.

She passed away peacefully, sitting in her arm chair at her home in Shearwater with her little dog, Toby, beside her.
We will remember her.

A donation has been made to the Australian Orchid Trust Fund by Ken Siew. 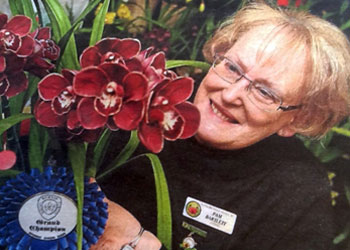