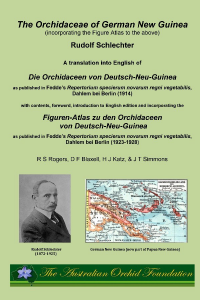 The Orchidaceae of German New Guinea

And incorporating the Figure Atlas to the above as published in Fedde’s Repertorium specierum novarum regni vegetabilis, Dahlem bei Berlin (1923-1928).

With the translation into English of one of Rudolf Schlechter’s major works on Orchidaceae, this edition has now become a priceless gift from the earlier days of orchid exploration and research. The text was completed and published in 1914 (in German) and the analytical drawings published 1923-1928 (without text). These two volumes have been incorporated together with explanatory Appendices and Maps. Schlechter described 1420 taxa (in 116 genera) of which 1185 were described for the first time. The Group Dendrobiinae is reviewed and the genus Dendrobium is divided into 41 sections or sub-genera, 30 of which occur in Papuasia. New Guinea is the centre of speciation for the two largest genera of Orchidaceae, Bulbophyllum and Dendrobium. This edition is still regarded as the best and is an indispensable reference on New Guinea orchids today.

A publication of The Australian Orchid Foundation.