Phil’s love of orchids began in 1975.  He was given a plant as a thank-you for felling a friend’s tree and it had a tiny spike.  It was Cym.Arunta Amber.  Phil nurtured it and entered it in the Traralgon Orchid Show as a novice.  It won several prizes including Grand Champion.   Phil was hooked, the orchid house grew, and he broadened his interest into Dendrobiums and Sarcochilus.

Phil was a very neat and determined person which was reflected in his love of Orchids, his orchid house was well ordered, his plants very well presented, and he followed a rigorous breeding philosophy carefully selecting for the traits he wanted to see expressed in his plants. Presentation of plants was almost an obsession, and he went to great lengths, devising a range of aids to better present his flowers to ensure they were shown to perfection. The success of this was clearly seen on the show bench where he regularly presented winners.

Moving to Kiah near Eden NSW in 1989 he joined the Sapphire Coast Orchid Club and later clubs in Bairnsdale, Traralgon and Drouin.  He became a judge and travelled widely including Tasmania and was often called on as a guest speaker.  He developed a fertiliser which he called his Horse Manure Tea which he widely advocated to anyone who would listen.  More recently however he returned to a more pragmatic approach and used a conventional brew.

He commenced hybridising in 1980 and was the originator of 21 registrations of which 3 were awarded: Den. Nanny Joy, Den. Julia, and Den. Finoca.  All were OSCOV awards. He also was the Registrant for 51 plants, 14 were awarded and the most successful were Den. Warrigal, Cym. Radiant Ruby, Den. Sheena, Den. Lochiel, and Den. Noah. His Cym. Drouin Masterpiece ‘Kaleidoscope’ HCC/OSCOV and AD/OSCOV was  Victorian Cymbidium of the Year 2011.

He won the 2007 South and West NSW Regional Show with Den. Jayden Goodie which was also awarded the Gold Ira Butler Trophy 2007. Prior to this in 2002 he won a Gold Ira Butler award with Den Warragul Magenta and as well has been awarded six Silver Awards.

Phil will be remembered by a wide range of people for his generosity with advice and his enthusiasm for orchids. Friend Michael Wood proposes to register a plant, Memoria Phil Grech, to commemorate his life using one of his plants, Den. Nanny Joy ‘My Love’ named for his wife Joy and David Butler’s  Den. Cosmic Gold ‘Sandy’, a lasting memorial.

Phil’s life was spread between Family, Fishing and Orchids and his passing has left a big hole in his family and the Orchid Community.

A donation has been made to the Australian Orchid Trust Fund by the Sapphire Coast Orchid Club Inc. 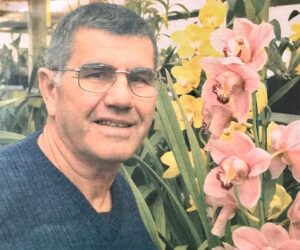