She can rightly be regarded as the matriarch of orchid growers and societies in Tasmania.

Phyl was born on 17 July 1923 and grew up on a rural property at Kempton where she learned to shoot a gun, her father insisting that she could only shoot rabbits if she hit them in the eye to ensure the skin was not damaged.

She attended secretarial school in Hobart and worked at a local radio station and the Strand Theatre (now Odeon). Phyl met and married Chris in 1948. They operated a service station for a number of years and spent time rally driving assisting with the establishment of Baskerville race track, manning check points for Targa Tasmania and generally enjoying life in the fast lane. Phyl was renowned for her ‘lead foot’; she was the second woman in Tasmania to obtain a CAMS license.

Her interest in orchids came about when she took Chris to an orchid show and bought him an orchid for his birthday. As Chris became a grower she joined him in a hobby that became a lifelong interest. Phyl won many prizes and awards with her flowers. She set a standard of growing and presentation which became the benchmark for which we can only aspire to reach.

She established the Tasmanian Orchid Society (TOS) newsletter, served as president over a number of years and as state registrar of judging, along with Chris, conducted judging classes for 40 years from 1963. She was a life member of TOS. Phyl and Chris were joint recipients of The Australian Orchid Foundation Award of Honour in 2012.

Phyl and Chris were partners in life and orchid growing; her great loves were Chris, family and orchids. Following Chris’ death in 2014 her interest in orchids and the TOS did not wane. She was always interested to know what was happening and provide me with cultural advice.

I hold her responsible for the establishment and popularity of Masdevallia orchids in Tasmania when she started importing them from South America along with a number of other growers.

On a number of occasions, when she was not feeling the best, she told me she had reached the pearly gates and had complained to Chris that they would not let her in. She is now united with Chris in orchid heaven.

Phyl was a lady with an indomitable, ‘never give up you can always do better’ spirit.

Farewell to a great friend.

A donation has been made to the Australian Orchid Trust Fund by the Tasmanian Orchid Society Inc. 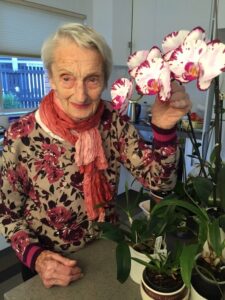