Ray and Barbara started their hobby by accident. After they moved into their home in Townsville which had very little growing in the garden, Barbara’s father came over to visit. What started their hobby was asking him to pot up one of his asparagus ferns. Around this time, Ray was working in the city and used to walk through the Coles store from Sturt Street to Flinders Street. On his way through he noticed they had a gardening section and amongst the plants they had some orchids. One day he brought home a dendrobium which was a native species. He was so pleased with his purchase that from that moment his interest in orchids began. In these early stages he was quite selective, focussing mainly on native orchids. Eventually, he became interested in other genera such as Paphiopedilum and Bulbophyllum.

Bill Lavarack recalls that Ray had a very interesting collection of species orchids in the backyard of his Canara Street home. In fact, there would have been few better collections of species orchids in the state. One of Bill’s first memories of Ray was one morning near Bluewater Creek on Townsville’s northern suburbs. There in amongst the paperbark melaleucas, he met Ray and his friend Peter Pavia, a local pharmacist. They were equipped with a sharp blade on the end of a long stick and were snicking off flowers from plants of Dendrobium canaliculatum (tea tree orchids) which are abundant in the area. The idea was to see if they could find plants with unusual colour patterns in the flowers.

Along the way, Ray became a member of the Townsville Orchid Society (TOS) where he was soon to meet many other like-minded orchid growers and further develop his interest. A few years later he became the president of TOS, a position he held for many years. Along with a few others he was involved in the far-seeing purchase of the Society’s own hall – something most other orchid societies are deeply envious of. This hall allowed freedom in staging shows and in holding meetings and was also a source of revenue.

Ray was a staunch member of the AOF for many years and, along with good friend Len Lawler, he was a major factor in getting northern orchid identities recognised with an AOF Award of Honour. Among those he proposed were: Len Lawler, Alick Dockrill, Bruce Gray, Jack Wilkie, Ken McPherson and Bill Lavarack. Rather quiet and retiring in nature (except when riled), Ray was a good organiser, but often preferred to remain in the background. An example of this is what is probably Ray’s greatest achievement – the publication of the ‘Proceedings of the 8th Australian Orchid Conference’. The conference was held in Townsville in 1983.  Ray was part of an enthusiastic committee which put on a conference and show the equal of that produced by any capital city, but somehow, he managed to remain in the background.  His major contribution was to organise a list of expert guest lecturers and then to publish the Proceedings.

Aside from his involvement in the TOS, in the early 1980s, his passion continued in a laboratory in the garage of Peter Pavia’s place. They both began talking about and working on Tissue Culture. Being a chemist, Peter was knowledgeable about the different growing media to use. It didn’t take long for the two of them to set up a laboratory near Peter’s garage and for them to be producing their own flasks of seedlings and cultivating their own plants.

As his health slowly declined and he became less able to continue these practices his interest lived on in conversations with good friends, neighbours and family. Anyone, but mostly his much-loved children and grandchildren, can attest to his vivid passion for orchids. 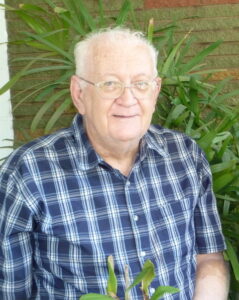