Robert Wyburn Hodgins was known by all as “Bob” Hodgins.

Bob was a very reserved and quiet man, but he was an achiever, a perfectionist.

Bob came from a family who were involved in horticulture for many years, in fact for four generations. It was their work with camellia cultivars, especially the ‘Csar’ camellia that was considered by many at the time to have revived the popularity of camellias in Victoria. This cultivar was commercially released by the Hodgins who obtained the propagating material from a plant growing in Breslins Nursery in Camberwell, after Breslin’s death in 1912. It was not until about 1930 when the plants that were first distributed by Hodgins Nursery became established and flowering well that the popularity of the Csar camellia increased. Breslin’s original stock plant, left in situ, lived unnoticed until the early 1950’s, when it was transferred to the Royal Botanic Gardens in Melbourne, where it still thrives today.

Bob’s mother and father, Gwen and Basil, were foundation members of the Victorian Orchid Club, which was formed in 1923. The orchids grown in those days were mostly species. The Hodgins Nursery had a large collection of cymbidiums and cypripediums which were used mainly for the cut flower trade. About 1930, because of orchids, I got to know Basil Hodgins. I was encouraged to call in to see his private collection that was growing at the rear of the family home. Bob and Betty (Bob’s sister) were about 5 and 3 at the time. Their home was about 100 yards from the nursery on the corner of Pascoe Vale and Moreland roads in Essendon. The collection consisted of many species, including cymbidiums and a good collection of Asian slipper orchids. That included a number of Paphiopedilum insigne varieties, many with double heads, rarely seen today.

Bob began his working life in the nursery. He saw war service at the age of nineteen in New Guinea until his discharge in 1945 at the age of twenty one.

Earlier, Basil Hodgins had purchased 15 acres of bushland in Baden Powell Drive in Frankston. About 1948, Bob mentioned that he had the task of clearing enough ground for the glasshouses and approaches that he had planned. I can recall helping Bob with the removal of the tough native tea tree. He had worked out that the only practical way of removing the bases was with dynamite! Bob’s army training had a practical use in peace time.

Unfortunately, Bob’s father passed away in November 1947 and did not see the progress that was being made at Frankston. The construction of the glasshouses and the building of a home on this bushland site were well advanced toward the end of 1949. In early 1950, the marriage of Bob and Eileen took place to open a new and happy lifestyle for each of them.

The Australian Orchid Foundation undertook a project (119/1981), “The Nutrition of Cymbidium Orchids”, the researcher being Mr David G Nicholls of the Horticulture Research Institute at Knoxfield in 1981. The institute required at least 100 young mericlones for this 3 year project. Bob provided the flasks of Cymbidium Wallara ‘Gold Nugget’ to successfully meet the demand.

Bob attended a number of World Orchid Conferences and participated in some capacity in most, the first being the 4th WOC in Singapore. Subsequently he visited Long Beach in California, Chiang-Mai in Thailand, Tokyo in Japan and several others.

I have not mentioned the array of colourful and wonderful hybrids that were created by Bob. I leave this topic to Geoff Browning, who was a close contemporary of Bob and his work.

Farewell Bob, your work will not be forgotten.

Tribute by Gerald Mc Craith AM

Quite an articulate person with a wry sense of humour. An extremely knowledgeable and successful Cymbidium Orchid Hybridiser.

He was born in 1924. After finishing school at Brighton Grammar, he enlisted in the armed forces (Army) and served almost 3 years in New Guinea.

Bob, being a fourth generation horticulturist, inherited from his father, Basil, the desire to only grow orchids. Basil sadly died just two years after Bob was discharged from the Army.

The early years of growing orchids was basically the culture of English raised hybrids. e.g. Cymbidium Arabella, Cym. Swallow, Cym. Dorchester, etc. (Note:- many of these English plants were sent to Australia for their protection as World War 2 began in England/Europe). However as time passed the lure of hybridising new varieties became a reality.

Bob realised that there was a distinct shortage of high quality green/yellow cymbidiums so he proceeded to rectify the problem.

The seedlings emanating from the mating of Cym. Borough Green ‘Conference’ and Cym. Wallara ‘Gold Nugget’ were named Cym. Jubilation. This was a very successful crossing and produced a number of awarded clones of which Cym. Jubilation ‘Geronimo’ was the most successful, gaining a quality award of FCC/AOC in 1984 (AOC award 489).

Cym. Girrahween ‘Enid’ FCC being the only other cymbidium to receive this accolade in the late 1940’s. Cym. Jubilation ‘Geronimo’ is still the only Australian raised cymbidium orchid to achieve this status.

Bob was a hybridiser that always sourced plants from other nurseries and made annual trips to Sydney and sometimes to Adelaide with the late Russell Martin (McBeans Orchids) and Geoff Browning (Peninsular Orchids) to view the new seedlings and stock.

Bob served the Victorian Orchid Club (VOC) for many years in a number of positions (President, Committee Member and Registrar of Orchids).

His devotion to the promotion of orchids in Victoria was a prime aim and his contribution to the establishment of new clubs was applauded by all that knew him.

Bob was a Judge of the VOC and later the AOC for numerous years. He was made an Emeritus Judge for his services to the Judging Panel.

Due to failing Health, Bob retired from his business in 1998 and the nursery was sold and converted into a housing estate. Bob retained some orchids for his own enjoyment and transferred them to a new residence not far from where the Nursery had stood.

As age wearies all, Bob was not able to attend Shows to exhibit or Judge and sadly he passed away on the 26th November 2002.

Bob will be missed by wife Eileen, Roby, Sue and family as well as members of Orchid Clubs and Friends that met him over the many years of his life. 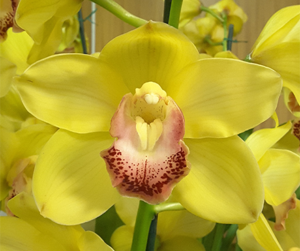